Researchers and clean air advocates in India have used GDB data to highlight the health impacts of air pollution, and to guide the development of a pioneering new framework to address this major risk factor.

Air pollution is the leading risk factor for early death and disability in India, contributing to conditions such as stroke, heart disease, respiratory infections, and lung cancer. Outdoor air pollution – the kind associated with emissions from power plants, industry, and vehicles – was linked to 1.1 million deaths, while indoor air pollution – which results from the burning of solid fuels such as wood, dung, and crop residues in people’s homes for cooking and heat – contributed to another 977,000 deaths. 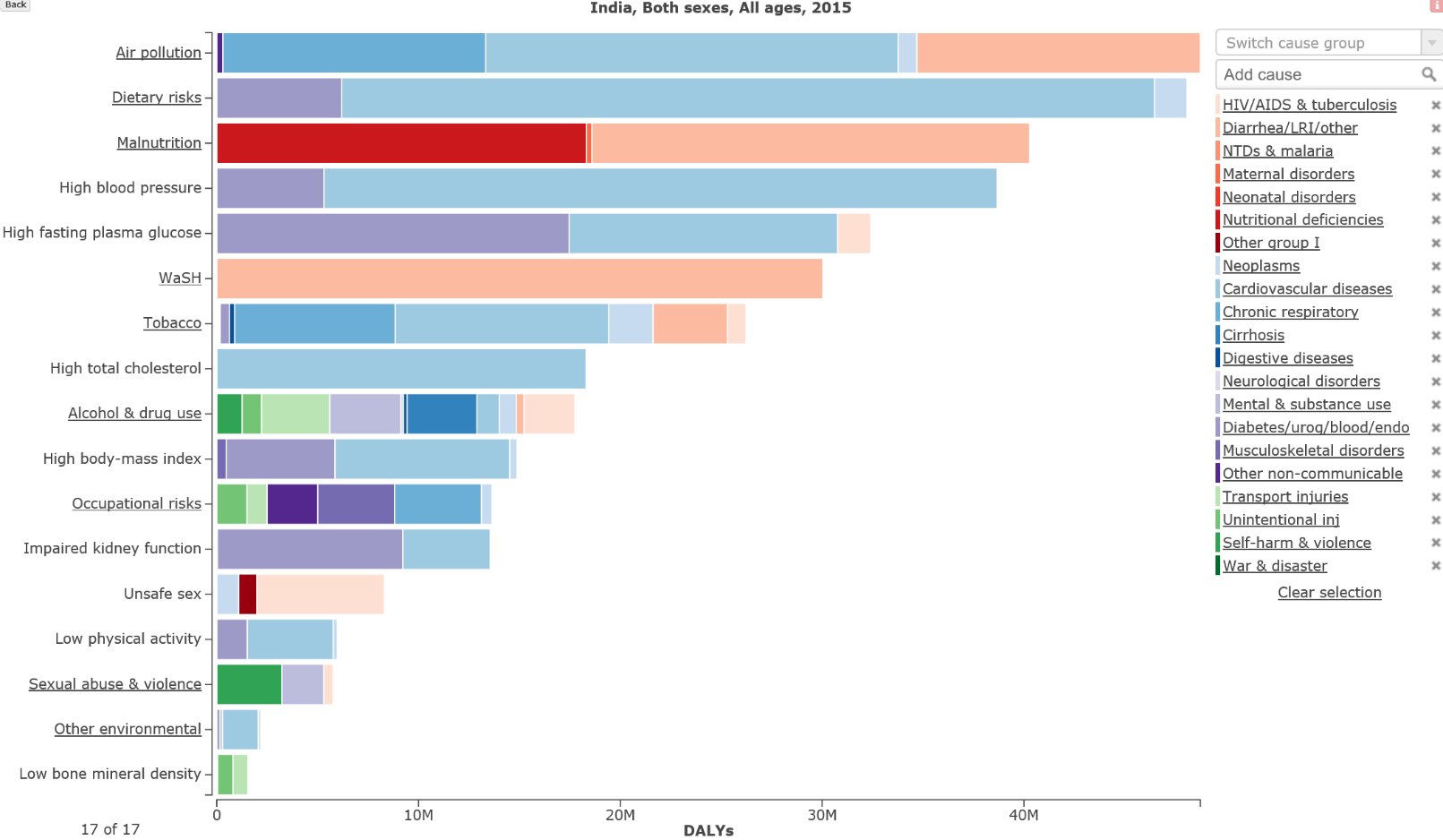 Leading risk factors for all causes in India by number of DALYs, 2015

Faced with alarming statistics like this, researchers in India have been using IHME’s evidence to spur the government into action on managing air quality. Kalpana Balakrishnan of Sri Ramachandra University, Chennai, and Anumita Roychowdhury of the Centre for Science and Environment, New Delhi, have been leading advocates for tackling the problem of air pollution in India, using GBD data in a number of publications and presentations to demonstrate the heavy burden it imposes on the nation’s health. Their work has demonstrated not only that the health burden caused by air pollution is higher and more wide-ranging than previously estimated, but also that authorities will need to take a new approach when it comes to improving air quality: rather than the traditional focus on reducing emissions in cities, there is a pressing need for integrated strategies that deal with both outdoor and indoor air pollution.

The Indian government has listened. In 2015 the Ministry of Health and Family Welfare (MHFW) convened the Steering Committee on Air Pollution and Health Related Issues, releasing a landmark report on the subject that makes several recommendations for achieving the largest possible reductions in exposure to air pollution. These recommendations include improving access to clean cooking energy, targeted approaches to reducing vehicle use, controlling trash burning, and promoting the uptake of clean technologies in industry. According to members of the committee, this integrative approach “will not only help address this major problem in an efficient and effective manner, but also serve as a model for other developing countries that likewise need to manage health impacts from a combination of household and outdoor air pollution.” Concrete policy actions are already starting to take shape: the government’s most recent budget includes a commitment of at least $1.5 billion dollars to provide clean cooking fuel to 50 million poor households across the country.

Noting that there is no “silver bullet” solution for reducing air pollution, India’s MHFW has committed to taking “a multi-sectoral approach, driven by environment and health data, science, and evidence.” GBD is one key source of data guiding these innovative efforts, which will help to reduce exposure to air pollution and its severe impact on people’s health across urban and rural India.