New paper focuses attention on health inequality in the US

A new study from IHME contributors on “Inequalities in life expectancy among US counties, 1980 to 2014” has provoked widespread attention and discussion from media organizations, decision-makers, and the public. Published in the Journal of the American Medical Association on May 8, 2017, The Washington Post, The Guardian, The Atlantic, and NPR have covered the study, as well as popular media, science, and technology websites such as Gizmodo, Ars Technica, and FiveThirtyEight. The director of the National Institutes of Health, Dr. Francis Collins, also recently published a blog post emphasizing the importance and implications of the study.

“The findings serve as a sobering reminder that, despite the considerable progress made possible by biomedical science, more research is needed to figure out better ways of addressing health disparities and improving life expectancy for all Americans,” wrote Collins.

The paper mapped life expectancy in the US by county from 1980 to 2014, and the results were deeply surprising for many. While life expectancy has increased for the country as a whole, the inequality among counties and regions was far more dramatic than most expected, with differences of as much as 20 years between the counties with the highest and lowest life expectancies. More than this, the authors warn that inequalities among regions are growing, with life expectancy actually dropping in 13 counties. Dr. Christopher Murray, IHME director and study author, emphasized this point, remarking that "With every passing year, inequality — however you measure it — has been widening over the last 34 years. And so next year, we can reliably expect it'll be even more than 20. That is probably the most alarming part of the analysis."

Life expectancy by county, both sexes, 2014 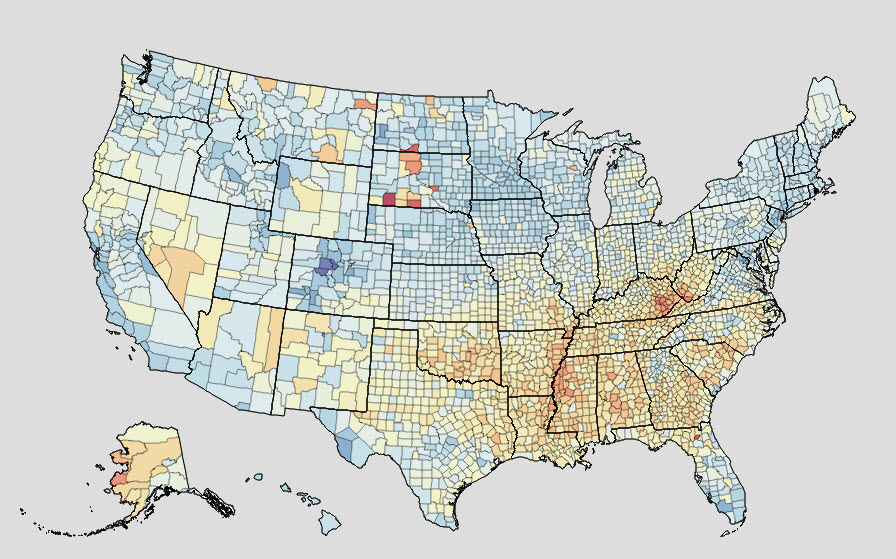 The causes of these disparities are linked to many factors, including differences in socioeconomic status, race and ethnicity, behavioral risk factors (such as diet, smoking, and exercise), and differing access to health care across the country. Yet while causes are complex and often intertwined, there are steps that can be taken to promote more equitable health outcomes for all. Paper author and IHME faculty member Dr. Ali Mokdad has likewise noted the need for a greater emphasis on preventative measures such as regulating harmful substances and improving access to screening services nationwide.

Dr. Mokdad told The Guardian that one of the goals of the report was to start a conversation among communities, health care experts, and policymakers about narrowing the inequality gap. Hopefully the widespread interest in the paper leads to continuing conversation and concrete action to improve health inequality in America.