The World Health Organization Regional Office for Europe (WHO/Europe) and its members view burden of disease data as an essential component of population health monitoring, and an important indicator for policy change. As a result, these bodies have joined forces with the Institute for Health Metrics and Evaluation (IHME) to carry out detailed disease burden analyses in the region.

Last week, an editorial published in the European Journal of Public Health entitled “Sharing the burden: a new European Burden of Disease Network is formed” announced the launch of a new European Burden of Disease Network (the Network). This newly launched Network intends to facilitate collaboration across the European region, filling gaps in Europe’s burden of disease estimates, and promote the use of these estimates to inform decision-making. 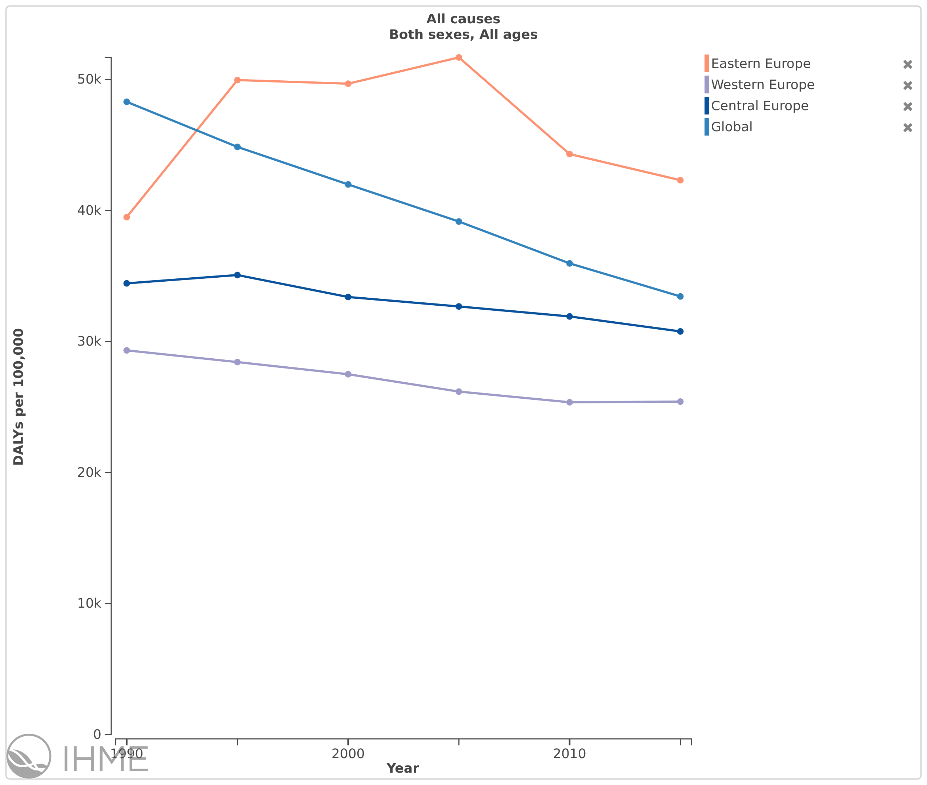 Measuring a problem is a good first step towards addressing it. Consider the work of John Snow, Florence Nightingale or Rudolf Virchow as examples of that principle in action. The Burden of Disease (BoD) approach takes this concept to another level by attempting to measure…multiple problems in multiple settings simultaneously.

The editorial emphasizes the importance of IHME’s burden of disease methodology in measuring and monitoring population health trends, describing the IHME-led study as “the largest and most comprehensive effort to date to measure the levels and trends in health loss for all countries at the national level from 1990 to present.” IHME, the only member of the network that is not a WHO/Europe member state, is acting as a technical advisor to the Network. Professor Mohsen Naghavi and Meghan Mooney, Senior Engagement Manager, serve as IHME’s representatives to the Network.

In response to a 2015 memorandum of understanding (MOU) between WHO and IHME, which called for further collaboration on burden of disease research, the WHO Regional Office for Europe partnered with IHME to set up the Network. Public Health England is chairing the Network for the first two years along with the Netherlands.

The Network was established at a London gathering of 11 participating European countries in September 2016, and falls under the support of the WHO European Health Information Initiative, an association committed to exchanging information, building capacity, and harmonizing processes in data collection and reporting in order to better inform health policies in the European Region.

While some countries lack burden of disease estimates, other countries may benefit from the Network’s guidance in expanding their analyses to the subnational level, which would provide focused data for informing decision-making locally.

In addition to expanding the evidence base and filling the regional gaps in burden of disease information, the Network will enact guidelines to ensure comparability across burden of disease studies. As a result, European regions can be easily compared to one another and to other international regions, providing an opportunity for countries with a higher disease burden to learn from better-performing health systems.

The purpose of the newly formed Network is to coordinate more comprehensive analyses so that all parts of the European Region may have access to high-quality burden of disease data. The Network will set best practices, guiding and advocating for the use of burden of disease evidence in policy, innovation, public health practice, and awareness.

The Network provides a new opportunity for knowledge exchange across the European region and collaboration with WHO and IHME, who are always looking for regional experts to expand the burden of disease evidence approach. The Network is seeking more professionals from European countries to contribute their expertise and expand the network. The Network also aims to facilitate international collaborations, including involvement in IHME’s Global Burden of Diseases, Injuries, and Risk Factors Study (GBD). Those interested in joining the Network should visit WHO/Europe’s website: http://www.euro.who.int/en/data-and-evidence/european-health-information-initiative-ehii.

To learn more about GBD and how to become a collaborator, visit http://www.healthdata.org/gbd/call-for-collaborators.