Worth 1,000 words: Illustrating the burden of disease among children and adolescents

The Institute for Health Metrics and Evaluation is perhaps best known for two things: coordinating the Global Burden of Disease (GBD) study, and its data visualizations. One could argue that the broad interest in and uptake of the former is thanks, to an extent, to the broad interest in the latter.

IHME’s flagship GBD Compare tool – which allows users to interact with GBD estimates by map, arrow diagram, and much more – has received more than 1.3 million views since it was launched in 2013. Clearly tools like GBD Compare, that help people make sense of complex data, appeal to an audience of more than just academics or policy wonks. Indeed, Bill Gates has said that, “in the whole world of data visualization, [GBD Compare] is one of the best efforts that’s ever been done.”

Similar to the Institute’s visualizations are its infographics. On everything from healthy eating to the Roux Prize (which IHME awards each year to individuals using health data to make an impact), IHME infographics distill information into visual, engaging formats.

For the past few months, IHME has been collaborating with the prestigious JAMA: The Journal of the American Medical Association on a series of infographics, beginning with one on HIV mortality, incidence, and prevalence, and most recently mortality rates in children under 5 years of age. The IHME-JAMA infographics have proven highly successful; “When and Why People Die in the United States, 1990-2013,” published in January 2016, has already garnered more than 27,000 views. 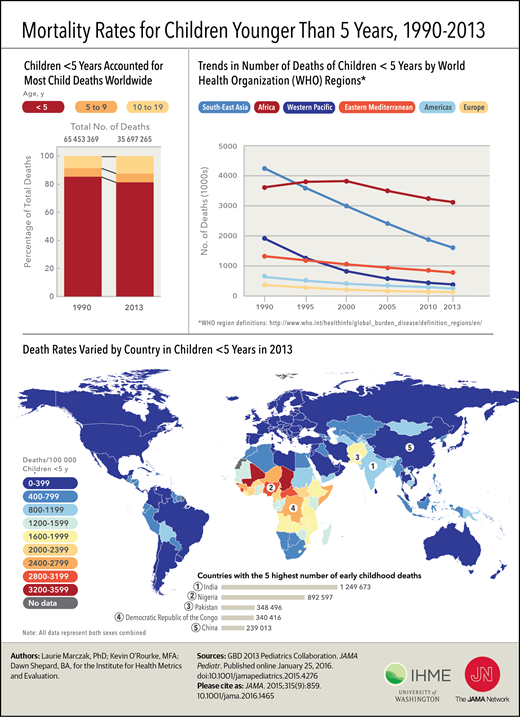 The child mortality infographic is derived from the JAMA Pediatrics paper “Global and National Burden of Diseases and Injuries Among Children and Adolescents Between 1990 and 2013,” published in print in March. Based on GBD 2013 data, the paper examines the “burden of diseases and injuries among younger children (aged <5 years), older children (aged 5-9 years), and adolescents (aged 10-19 years) between 1990 and 2013 in 188 countries.” The child mortality infographic’s story follows the study’s: though there has been progress on under-5 mortality, great burden still exists, particularly in sub-Saharan Africa and South Asia.

“We identified which diseases are the key contributors to mortality among children in each of the 188 countries, with the ultimate goal to shed light on country-specific areas that need more attention,” said Dr. Hmwe Hmwe Kyu, an Acting Assistant Professor at IHME and a lead author on the paper.

Distilling the findings of such an in-depth paper – the product of a collaboration among many, many researchers – into a one-page, graphics-heavy, readable format proved to be no mean feat. Working in concert with JAMA editors, IHME’s publications team produced not one, not two, not three, but six iterations of the graphic before it was final.

While the changes from first to sixth version (highlighted in the .gif below) might seem small, they greatly affect how readers approach the data. For example, in the first version, a bar chart showed deaths per 100,000 in children under 5 years for three regions. Contrast that with the final infographic, which tells a similar story, except using a line chart to show numbers of deaths by World Health Organization region, an approach that is both easier to understand (numbers vs. rates) and more detailed geographically.

“We wanted to highlight the progress that has been made but also draw attention to regions where mortality for young children is still a dominant concern,” said IHME Scientific Writer Dr. Laurie Marczak, who has helped lead several JAMA infographics. “Using both a line chart and a map allowed us to show the magnitude of the differences in child death rates, as well as how those deaths are distributed around the globe.”

The under-5 mortality infographic is the first of two planned graphics based on the GBD JAMA Pediatrics paper. The second infographic, tentatively slated to publish in May, will explore the other age groups covered by the paper, with causes of death for four age groups plus mortality rates.

To view IHME’s other infographics – including those on cardiovascular disease, health spending, and obesity – see our infographics page. This Visualizing Health Metrics infographic, based on the Global Burden of Disease 2013 study, provides information on changes in mortality rates for children younger than 5 years, for both sexes, ...