Despite progress, HIV/AIDS remains a challenge in Namibia

Though the rate of HIV/AIDS-related deaths in Namibia has decreased since its peak in 2005, in 2013 it remained the leading cause of death for all ages. In addition, while life expectancy in Namibia declined between 1990 and 2004 – largely due to the HIV/AIDS epidemic – it has rebounded. However, 2013 life expectancy for both sexes is slightly below 1990 levels.

These findings come from a new report of Namibia health indicators. Today the Institute for Health Metrics and Evaluation (IHME), in partnership with the World Health Organization, Namibia, published the report Namibia: State of the Nation’s Health: Findings from the Global Burden of Disease.

Based on Global Burden of Disease Study 2013 (GBD 2013) estimates, the report details the toll HIV/AIDS has taken on Namibia’s health and shows progress made in addressing infectious diseases. It also shows that the country is experiencing the global epidemiological transition, as non-communicable diseases (NCDs) are beginning to rise in importance to policymakers.

Per Figure 1 below, in 2013 HIV/AIDS was the leading cause of death in Namibia, causing just over 20% of deaths. However, this is a 30.4% decline from 2005, when HIV/AIDS deaths in Namibia peaked. The second- and third-leading causes of death in 2013 in Namibia were tuberculosis and lower respiratory infections, respectively. Tuberculosis death rates increased by 3.9% between 1990 and 2013, while lower respiratory infection death rates decreased by 13.3%.

Several NCDs, including cardiomyopathy, chronic kidney disease, and diabetes increased in rank between 1990 and 2013, while deaths from diarrheal diseases – which caused more than 31,000 deaths across all of Southern sub-Saharan Africa in 2013 – went down over 40% in Namibia. 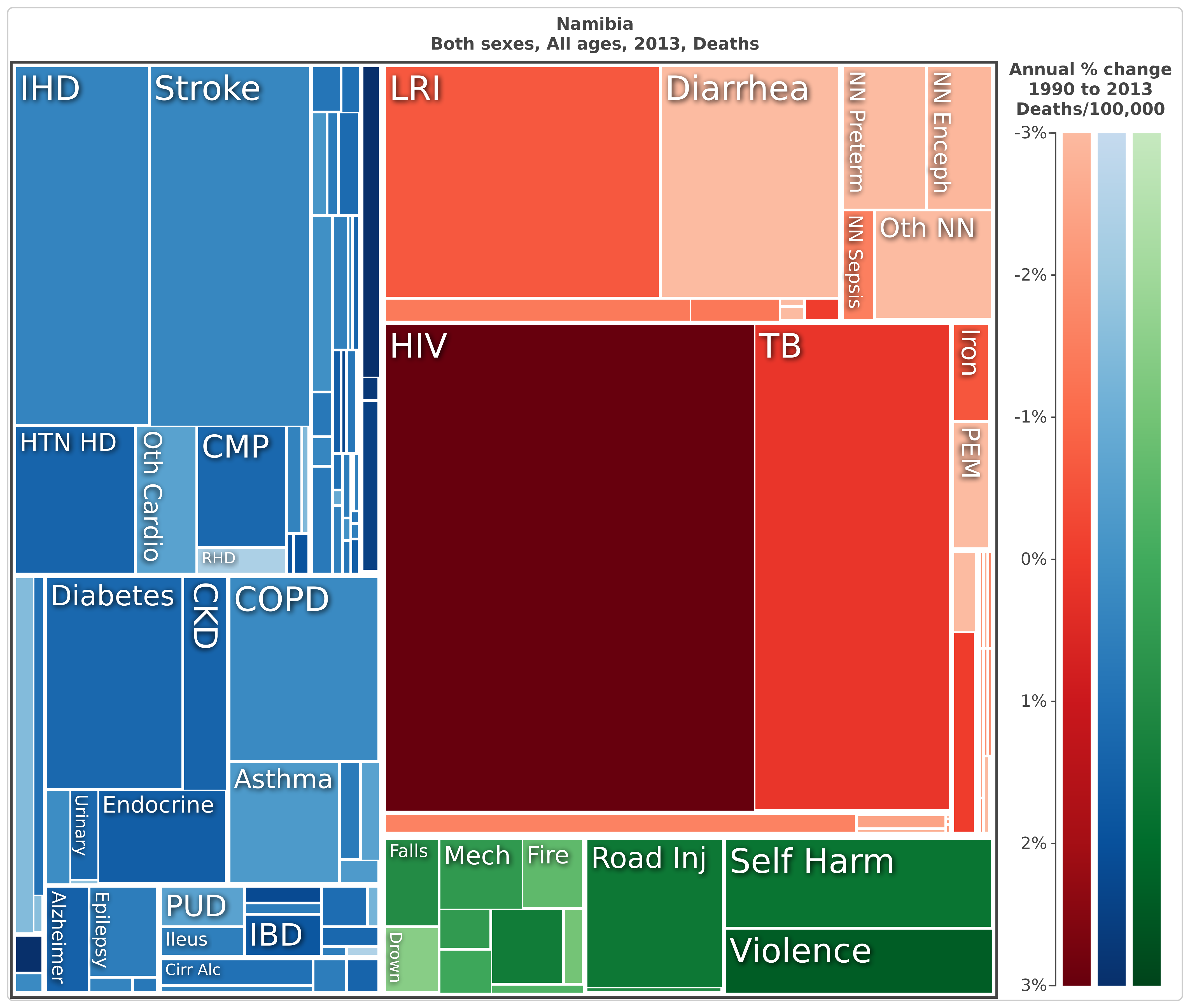 The leading causes of disability in Namibia were largely unchanged between 2000 and 2013, with low back and neck pain, depressive disorders, and iron-deficiency anemia as the top three causes in both 2000 and 2013. The rate of the first two increased during this period, with low back and back pain rising more than 12%, while depressive disorders increased just over 8%. Iron-deficiency anemia, meanwhile, decreased more than 12% between 2000 and 2013.

The illustration below shows changes in the leading causes of risk factors between 2000 and 2013 for males and females in Namibia. Unsafe sex was the leading risk factor for both sexes in 2013, while alcohol and drug use and high systolic blood pressure were the second-leading causes for males and females, respectively. Several risk factors declined in rank between 2000 and 2013, particularly unsafe water, sanitation, and handwashing.

The leading causes of death in Namibia in 2013 were very similar to those of its Southern sub-Saharan African peers (Botswana, Lesotho, South Africa, Swaziland, and Zimbabwe). In 2013, HIV/AIDS was the leading cause of death across all countries, with cerebrovascular disease and tuberculosis also highly ranked across the region. However, an analysis of probability of death by age group shows that Namibian children aged 0–14 years have the second-lowest probability of dying in the region, behind Botswana. And Namibian females aged 15–49 years have the lowest probability of dying in comparison to other countries in Southern sub-Saharan Africa.

“Namibia has made great progress since the worst days of the HIV/AIDS epidemic, but this report shows that there is still work to be done, not only for HIV/AIDS, but also for NCDs, and especially for injuries in young men who die at alarming rates from suicide, road injuries, and homicide,” said the report’s author, IHME Lecturer and Engagement Officer Dr. Jed Blore. “We hope this work will aid policymakers in Namibia as they decide how to allocate resources. It is also important to increase the robustness of data on Namibian health indicators, as doing so would lead to more precise estimates. We look forward to working with stakeholders in Namibia to strength the evidence base for health decision-making.”

Read the report at: http://www.healthdata.org/policy-report/namibia-state-nations-health

The World Health Organization (WHO) is building a better future for people everywhere. Health lays the foundation for vibrant and productive communities, stronger economies, safer nations and a better world. Our work touches lives around the world every day – often in invisible ways. As the lead health authority within the United Nations (UN) system, we help ensure the safety of the air we breathe, the food we eat, the water we drink and the medicines and vaccines that treat and protect us. The Organization aims to provide every child, woman and man with the best chance to lead a healthier, longer life. WHO has been at the center of or behind dramatic improvements in public health since it was established in 1948, gathering the world’s top health experts, defining solutions, delivering guidelines and mobilizing governments, health workers and partners to positively impact people’s health. The Organization works in close collaboration with other UN agencies, donors, non-governmental organizations (NGOs), WHO collaborating centres, and the private sector. It contributes to promoting the general health of people across the world. Over 7,000 public health experts from all over the globe work for WHO, in most countries worldwide. Namibia: State of the Nation's Health

Namibia: State of the Nation’s Health explores the progress Namibia has experienced over the last two decades and the new challenges it faces as its population grows and ages.