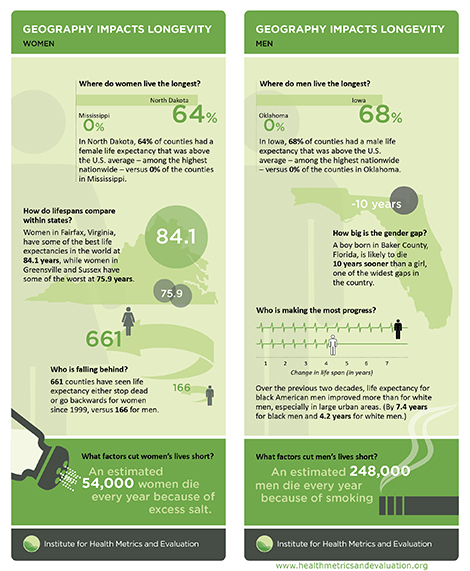 April 19, 2012 (ATLANTA) - Nationwide, women’s lifespans are improving at a much slower pace than men, and in hundreds of counties women are living shorter lives today than they did two decades ago, according to new county-by-county estimates of life expectancy released today by the Institute for Health Metrics and Evaluation (IHME).

The new data also show that life expectancy for black Americans – both men and women – is improving at a faster rate than for white Americans, especially in large urban areas in New York and California.

Nationwide, whether urban or rural, the gaps in health outcomes are growing, Dr. Ali Mokdad, the head of IHME’s US County Performance research team, told a crowd of health reporters and researchers at the Association of Health Care Journalists conference.

“It’s tragic that in a country as wealthy as the United States and with all the medical expertise we have that so many girls will live shorter lives than their mothers,” Mokdad said.

The gap between women living the longest lives and those living the shortest lives is growing, too. In Collier, Florida, women live 85.8 years on average. In McDowell, West Virginia, they live to be 74.1. That’s an 11.7-year gap. In 1989, the gap was 8.7 years. For men, the gap is larger – 15.5 years – but it has grown by less than a year since 1989. Men live the longest in Marin, California, at 81.6 years. They live the shortest lives on average in Quitman and Tunica, Mississippi, at 66.1.

In order to better target local solutions to health disparities, IHME is pioneering new methods of harnessing existing data and gathering new data in a partnership with Public Health - Seattle & King County. The Monitoring Disparities in Chronic Conditions Study, one of the largest population surveillance projects in modern history, tracks disparities in diabetes, heart disease, and other conditions at the local level.

The study captures socioeconomic and health risk factors and the resulting hospitalizations, outpatient visits, and adherence to treatments. “What makes the difference is getting the right medication at the right dose,” Mokdad said. “We screen people for diseases but don’t always follow through to manage the diseases.”

The county-level estimates of life expectancy are part of IHME’s broader effort to provide researchers and policymakers with more accurate analysis of mortality and disease burden globally, nationally, and locally. IHME is the lead institution on the ambitious Global Burden of Diseases, Injuries, and Risk Factors 2010 Study (GBD), which will provide the first comprehensive assessment of health status internationally since the original GBD publication in 1996.

“Life expectancy by county is just one of the many factors we’re going to be able to map and track with the tools we have developed for GBD,” said Dr. Christopher Murray, IHME Director. “We will be able to go into countries and examine at the very local level why some people are so much healthier than others.”

IHME’s much anticipated new estimates of life expectancy by county for the United States will be released at Health Journ...

IHME Post-Bachelor Fellows and staff will be exhibiting at the STEM Explosion Expo sponsored by Washington State LASER (Leadership and Assistance for Science Education Reform), a catalyst for susta...