Originally published by the University of British Columbia on February 12, 2016.

New research shows that more than 5.5 million people die prematurely every year due to household and outdoor air pollution. More than half of deaths occur in two of the world’s fastest growing economies, China and India.

Power plants, industrial manufacturing, vehicle exhaust and burning coal and wood all release small particles into the air that are dangerous to a person’s health. New research, presented today at the 2016 annual meeting of the American Association for the Advancement of Science (AAAS), found that despite efforts to limit future emissions, the number of premature deaths linked to air pollution will climb over the next two decades unless more aggressive targets are set.

“Air pollution is the fourth highest risk factor for death globally and by far the leading environmental risk factor for disease,” said Michael Brauer, a professor at the University of British Columbia’s School of Population and Public Health in Vancouver, Canada. “Reducing air pollution is an incredibly efficient way to improve the health of a population.“

Their analysis shows that the two countries account for 55 per cent of the deaths caused by air pollution worldwide. About 1.6 million people died of air pollution in China and 1.4 million died in India in 2013.

In China, burning coal is the biggest contributor to poor air quality. Qiao Ma, a PhD student at the School of Environment, Tsinghua University in Beijing, China, found that outdoor air pollution from coal alone caused an estimated 366,000 deaths in China in 2013.

Ma also calculated the expected number of premature deaths in China in the future if the country meets its current targets to restrict coal combustion and emissions through a combination of energy policies and pollution controls. She found that air pollution will cause anywhere from 990,000 to 1.3 million premature deaths in 2030 unless even more ambitious targets are introduced.

“Our study highlights the urgent need for even more aggressive strategies to reduce emissions from coal and from other sectors,” said Ma.

In India, a major contributor to poor air quality is the practice of burning wood, dung and similar sources of biomass for cooking and heating. Millions of families, among the poorest in India, are regularly exposed to high levels of particulate matter in their own homes.

“Having been in charge of designing and implementing strategies to improve air in the United States, I know how difficult it is. Developing countries have a tremendous task in front of them,” said Dan Greenbaum, president of Health Effects Institute, a non-profit organization based in Boston that sponsors targeted efforts to analyze the health burden from different air pollution sources. “This research helps guide the way by identifying the actions which can best improve public health.”

Note to media: Brauer and his colleagues are in Washington, D.C. and only available for interviews from there. Contact Heather Amos for details: Tel: 604.828.3867 Email: [email protected] 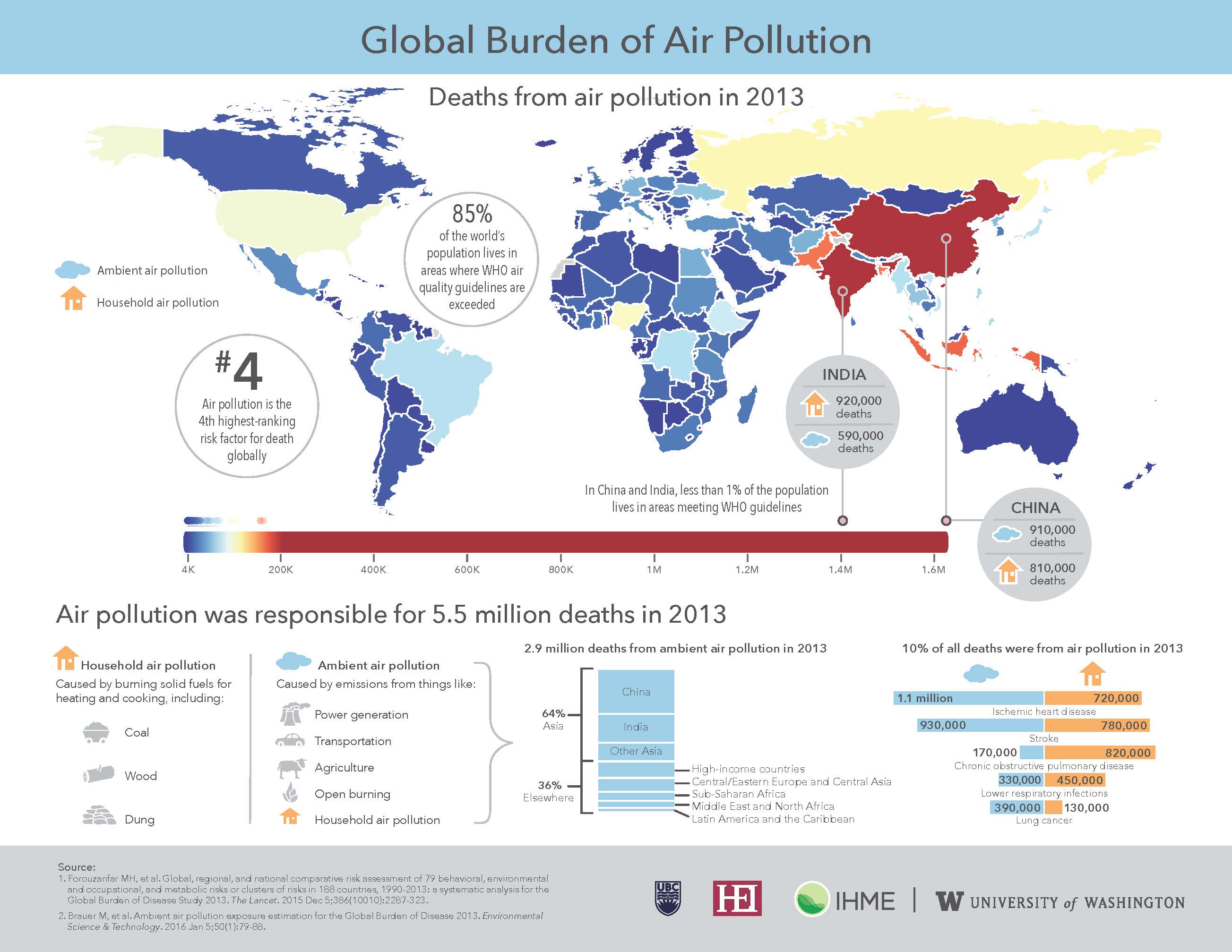 The research is an extension of the Global Burden of Disease study, an international collaboration led by the Institute for Health Metrics and Evaluation (IHME) at the University of Washington that systematically measured health and its risk factors, including air pollution levels, for 188 countries between 1990 and 2013. The air pollution research is led by researchers at the University of British Columbia and the Health Effects Institute. New research shows that more than 5.5 million people die prematurely every year due to household and outdoor air pollution. More than half of deaths occur in two...

Affiliate Professor Michael Brauer of the University of British Columbia will give the talk “The global burden of disease from air pollution” at the American Association for the Advancement of ...