The Tobacco Metrics Team at IHME and the Global Burden of Disease Study collaborative have produced a signficant volume of work to commemorate World No Tobacco Day, which is on May 31 every year. They published three tobacco-related studies in The Lancet, and these studies are currently the most comprehensive data on global trends in smoking to date, highlighting its enormous global health toll. Learn more in our press release. Below you'll find links to the studies, related articles by the researchers published in Think Global Health – a website IHME supports in collaboration with the Center for Foreign Relations, videos with lead authors and researchers, and infographics.

When I think about ending the tobacco epidemic, the importance of young people in that equation is really quite clear. The tobacco industry needs a steady stream of new smokers to initiate each year just to remain commercially viable. Young people face enormous social pressures as they navigate secondary school and the transition to adulthood which honestly leaves them vulnerable and particularly susceptible to addiction. This plays out in the data. We find that 90% of current smokers began smoking by the age of 25 and 20%, 1 in 5, began smoking regularly by the age of 15.

What our study adds is clear and consistent evidence from across the globe that if you can prevent smoking initiation among adolescents and young adults, there is just a very low likelihood that they would transition to become smokers later in life. The fact that initiation occurs during this very narrow age window also provides a clear opportunity for intervention. So if we can focus efforts on ensuring that young people remain tobacco-free through their mid-twenties, this will dramatically reduce smoking prevalence among the generation. In my mind, this is the opportunity and the path that we can take to achieve a tobacco-free future.

Exposure to secondhand smoke, also known as passive smoking, increases the risk of lung cancer, stroke, ischemic heart disease, and various respiratory conditions. According to our own Global Burden of Disease study, exposure to tobacco smoke was linked to 1.3 million deaths globally in 2019. About 35% of the world’s population is exposed to tobacco smoke at home or at work. Women and children face the greatest burden, and in countries like China and Indonesia where the smoking rates among men are still very high, over 60% of them are at increased health risk due to passive smoking.

Banning smoking in public spaces with smoke-free policies, encouraging the adoption of smoke-free homes, and increasing smoking cessation support are clear ways to protect non-smokers from tobacco smoke. However, less than 25% of the world’s population is covered by policies banning smoking from all indoor public places and the majority of smokers are still smoking inside their homes in the presence of non-smoking household members. That means countries must continue making progress on implementing and enforcing strong tobacco control measures which are effective in decreasing smoking and protecting non-smokers from secondhand smoke and its harmful lifelong consequences.

IHME surveyed 13 countries around the world to get a sense of what their household smoking policies were. We found that in households that had at least one daily smoker, over 60% of these households allowed smoking inside. And for households that had children, this percentage didn’t change that much. This is especially worrisome because women and children are amongst the most exposed to secondhand smoke. In addition to women and children, low-income communities and minorities also face increased risk of secondhand smoke exposure due to a variety of factors, and they also have a unique double burden as they’ve been identified as having increased risk of contracting COVID-19 and facing more severe symptoms. As secondhand smoke exposure weakens the immune system, it’s especially important that we protect against it during this time while we’re all still fighting another respiratory virus with COVID-19.

This year’s World No Tobacco Day theme is, “commit to quit.” When I think of that theme, I cannot help but think of the tobacco industry executive who in 1984 laid out the rationale for targeting young people as “replacement smokers” for people who quit, or more likely die from a tobacco-related disease. The work of the Institute for Health Metrics and Evaluation is important because it demonstrates and documents just how critical young people are to the tobacco industry. While smoking rates have been coming down in recent years, smoking rates among young men in most countries exceeds 20% and that’s much too high. Smoking rates among young women are increasing in many countries. Why is this happening? Tobacco industry marketing. The only difference now compared to decades ago is that those replacement smokers, those young people, they’re in low- and middle-income countries. In too many countries, children can’t go to and from school without being bombarded by tobacco ads. And if they have access to the internet, they will see tobacco advertising online. And if they’re not careful, they will be subjected to tobacco industry marketing in their social media feeds. With everything we’ve been through in the past year plus of the coronavirus pandemic, now there’s never been a better time or reasons for protecting the most vulnerable in our society. Smoking causes NCDs. NCDs elevate risk for severe COVID-19 disease and COVID death. Raising taxes on tobacco products to reduce their affordability is the most effective way to prevent smoking among young people. And for those smokers who commit to quit, they’ll have some help too.

The Tobacco Metrics Team at IHME has produced a large amount of work to commemorate World No Tobacco Day which is on May 31 every year. We want to highlight the significant toll that tobacco takes on populations around the world. What the past 15 months have demonstrated is that we all value our health greatly, and yet about 8 million people die every year from causes related to smoking and use of other tobacco products. All of these deaths are preventable and the results of our studies show how they’re distributed around the world and where the burden is the greatest.

The part that the world has the greatest opportunity to make a change is smoking among young people. Our study has shown that 9 out of 10 smokers began smoking regularly before the age of 25 which provides us with a unique opportunity to intervene. If somebody does not pick up the habit by age 25, chances are they’re not going to smoke for the rest of their lives. Investing in the health of young people by convincing them not to start smoking is going to have huge benefits for the health of populations around the world. If you couple that with benefits that will come from avoiding secondhand smoke – for people that don’t smoke – but also causes a lot of ill effects, that’s a huge amount of savings for health systems and a lot of lives saved around the world for years to come. 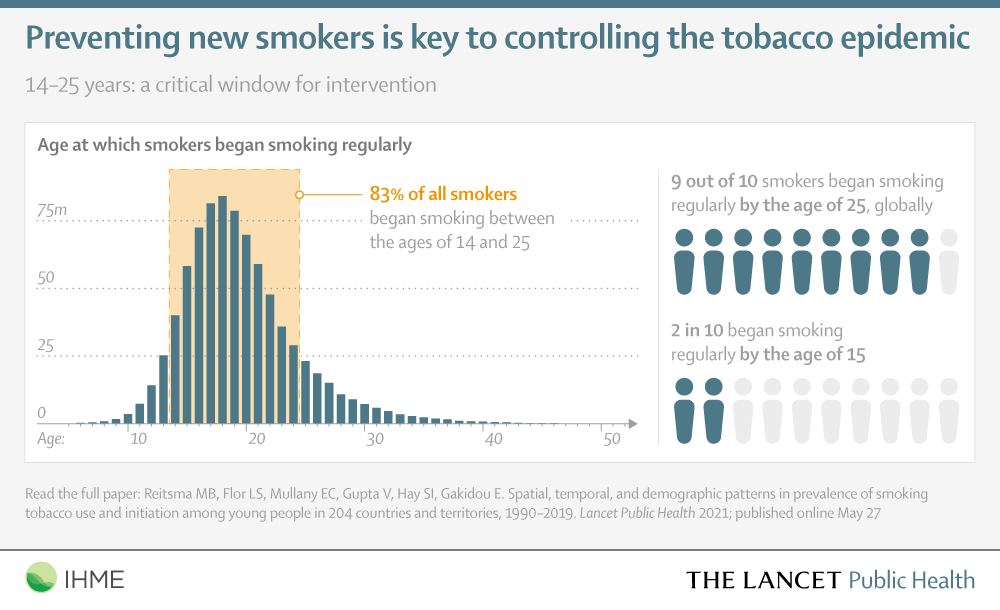 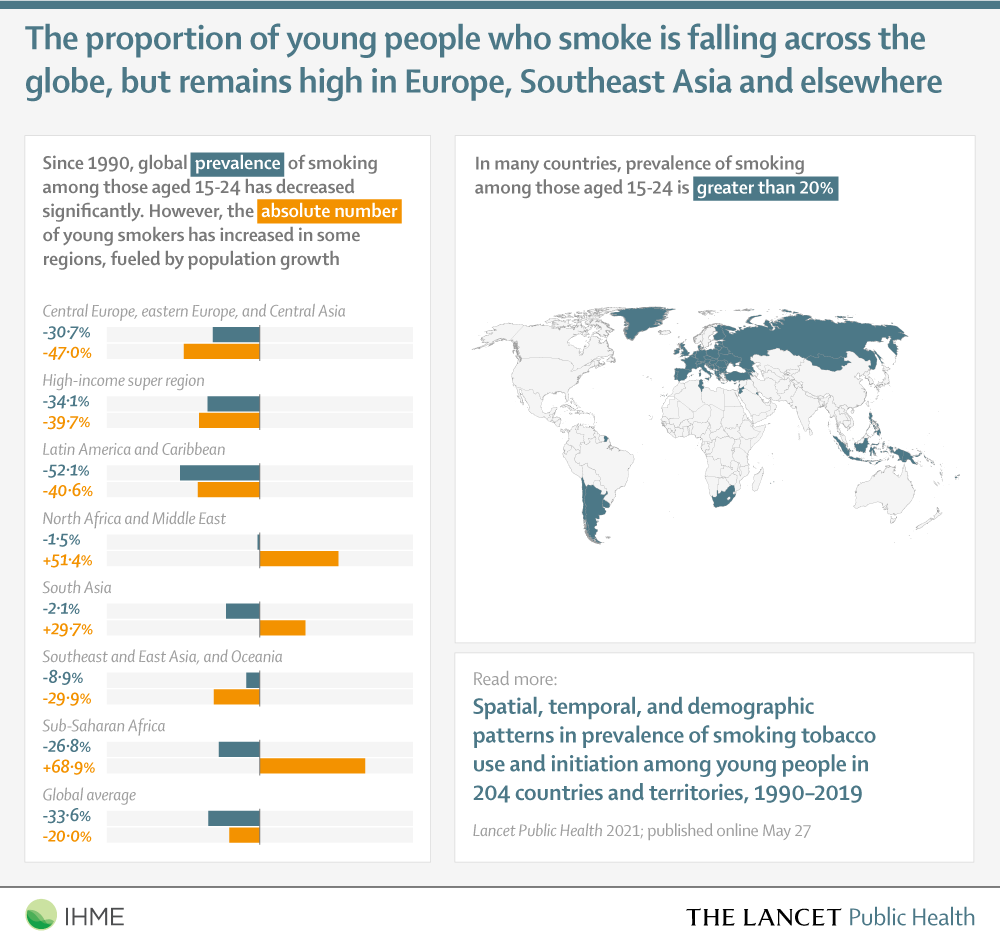 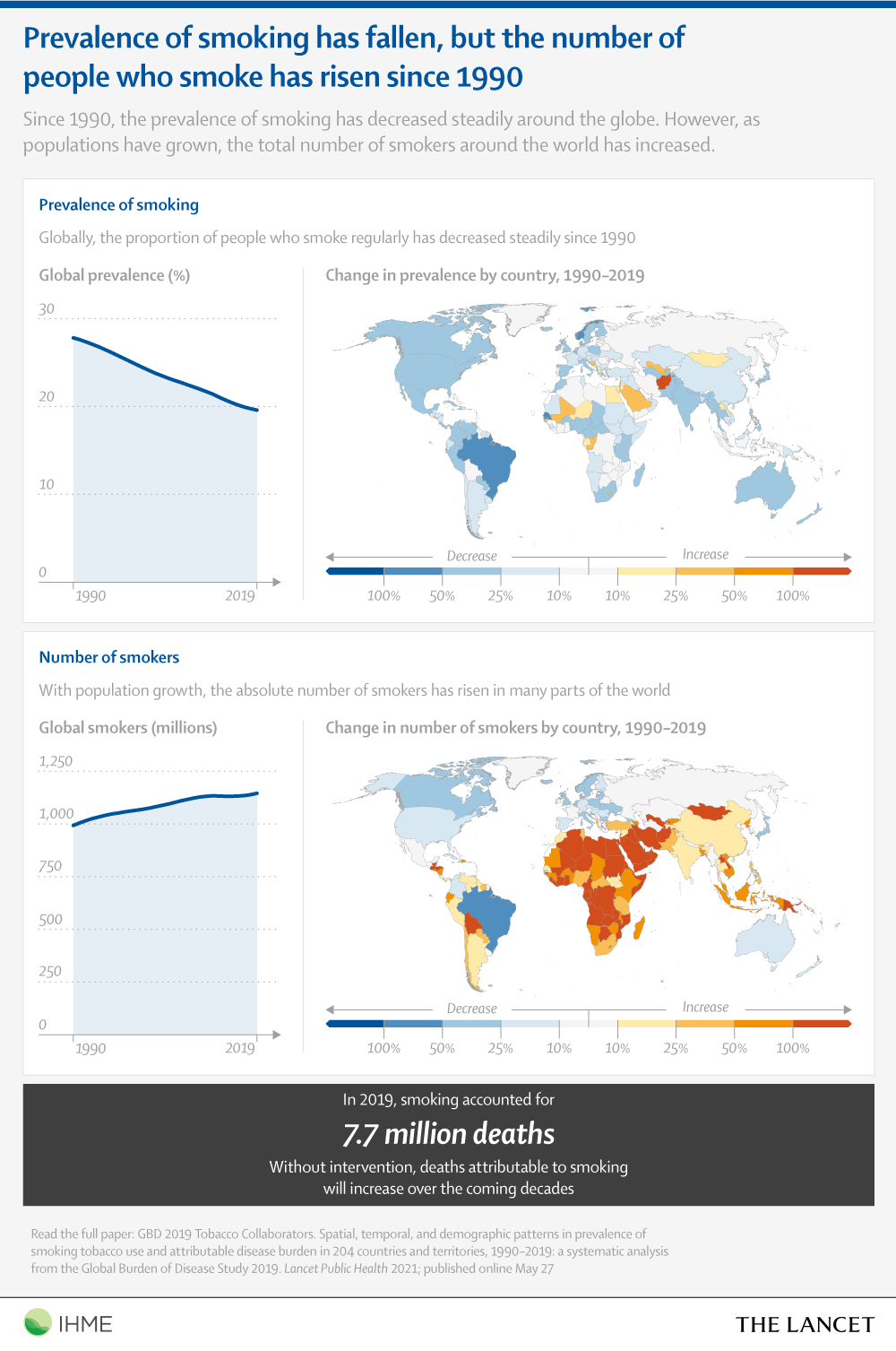