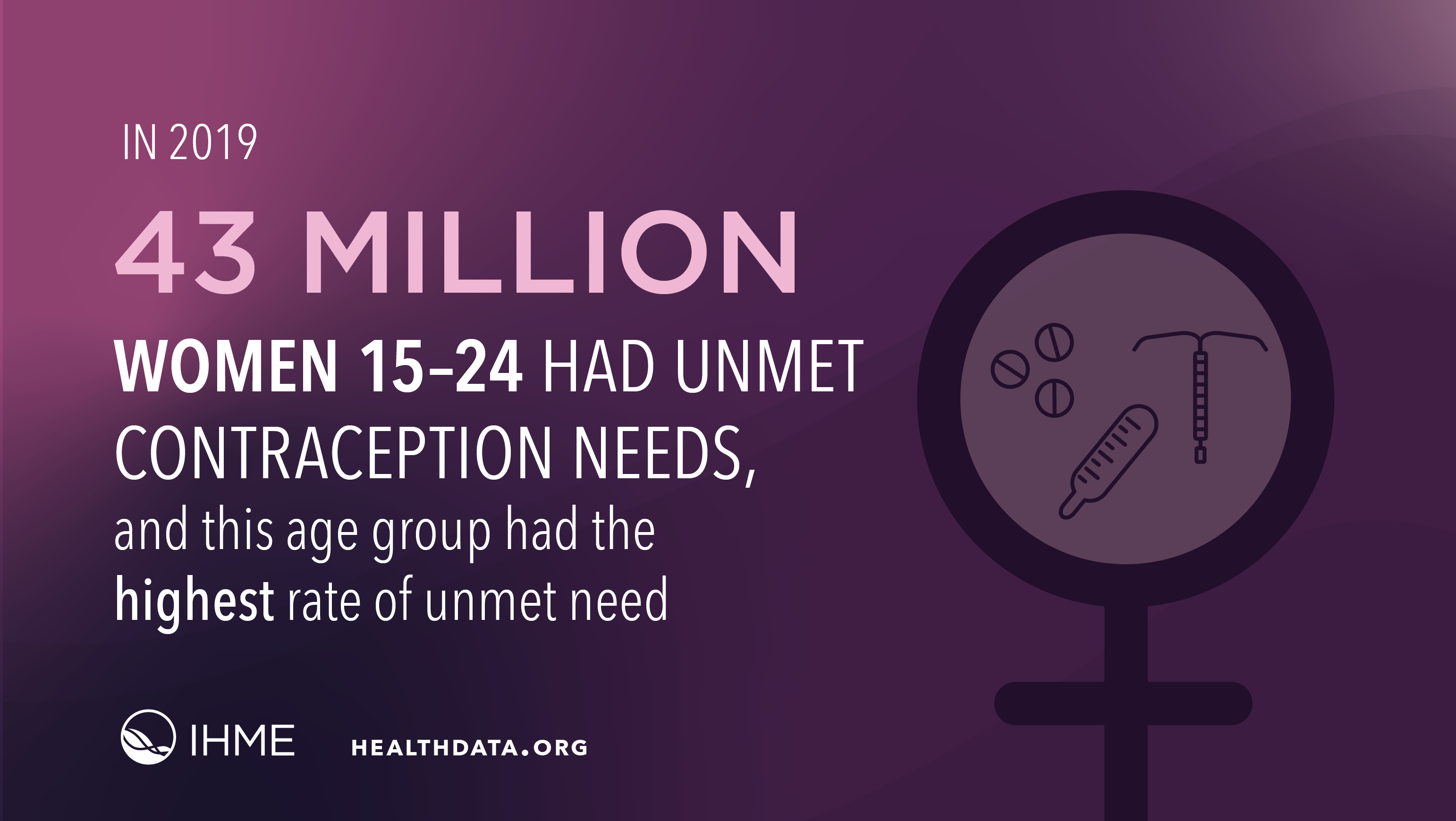 Published today in The Lancet journal by the Global Burden of Disease study, the most comprehensive assessment of worldwide contraceptive need and use estimated that over 160 million women and adolescents with need to prevent childbearing remained without contraception in 2019 – despite major increases in use at a global level since 1970. This study provides estimates of worldwide contraceptive use, need, and type continuously from 1970 to 2019 by country, age group, and marital status.

Expanding access to contraception is linked to women’s social and economic empowerment and better health outcomes, is a key goal of international initiatives, and is a Sustainable Development Goal (SDG) indicator. Contraception use is also associated with reductions in maternal and neonatal mortality by preventing unintended pregnancies. By allowing women to plan childbearing, contraception enables adolescents and women to remain in school to pursue further education and work that lead to social and economic empowerment later in life.

Understanding which age groups have the most unmet need is vital for policymakers to tailor and make accessible types of contraception to the population in need. Accommodating the preferences of women of different ages and marital statuses is also important for reducing unmet need. For example, the study showed that permanent methods, such as female sterilisation, are more likely to be used by older women, while younger women and adolescents tend to use short-acting methods, like oral contraceptive pills or condoms.

Based on data from 1,162 self-reported representative surveys on women’s contraceptive use, the authors used modelling to produce national estimates of various family planning indicators, including the proportion of women of reproductive age (15-49 years) using any contraceptive method, the proportion of women of reproductive age using modern methods, the types of contraceptives in use, demand satisfied with modern methods, and unmet need for any contraceptive method. [1] Women were defined as needing contraception when they were married or if unmarried, sexually active, able to get pregnant and not wanting a child within two years, or if they were pregnant or had just given birth but would have preferred to delay or prevent their pregnancy.

Gaps in contraceptive use remain after major global progress

Since 1970, the world has seen major increases in contraception use, driven by a significant shift from using less effective, traditional methods to using more effective, modern contraceptives, including oral contraceptive pills, IUDs, and male and female sterilisation contraceptive methods. However, there remain key gaps in use.

Dr. Annie Haakenstad, Institute for Health Metrics and Evaluation (IHME), University of Washington, USA, said, “Although we’ve observed excellent strides in contraceptive availability since the 1970s at a global level, there’s still a long way to go to ensure that every woman and adolescent girl can benefit from the economic and social empowerment contraceptives can offer. Our results indicate that where a woman lives in the world and their age still significantly impacts their use of contraception.” [2]

In 2019, the availability of contraceptives still differed significantly between regions and across different countries.

The Family Planning 2020 Initiative (FP2020) set a goal of increasing the number of women using modern contraception by 120 million between 2012 and 2020 in 69 priority countries. The study estimated that the number of women using contraception increased by 69 million between 2012 and 2019 in these countries (excluding Western Sahara), leaving the initiative 51 million short of reaching its goal if these levels remained unchanged in 2020.

The study finds that, compared to other groups, women and adolescents in the 15-19 and 20-24 age groups have the lowest rates of demand satisfied globally – estimated at 65% and 72%, respectively. Those aged 15-24 comprise 16% of total need but 27% of unmet need – amounting to 43 million young women and adolescents worldwide not having access to contraceptives they need in 2019.

The largest gaps globally were among young, married women.

Dr. Haakenstad continued, “Importantly, our study calls attention to young women being overrepresented among those who cannot access contraception when they need it. These are the women who stand most to gain from contraceptive use, as delaying having children can help women stay in school or get other training opportunities and to enter and maintain paid employment. This can lead to social and economic benefits that last throughout a woman’s lifetime and is an essential driver toward greater gender equity.” [2]

The types of contraceptive methods in use vary significantly by location. The authors suggest that the dominance of single methods could indicate a lack of suitable choices for women and adolescent girls.

In 2019, female sterilisation and oral contraceptives were dominant in Latin America and the Caribbean; the oral conceptive pill and condoms in high-income countries [3]; IUDs and condoms in Central Europe, Eastern Europe, and Central Asia. Female sterilization comprised more than half of all contraceptive use in South Asia. In addition, in 28 countries, more than half of women were using the same method, indicating that there may be a limited availability of options in these areas.

Professor Rafael Lozano, Institute for Health Metrics and Evaluation (IHME), University of Washington, USA, says, “Our study highlights that not only should contraception be available to all women, but also suitable choices of contraceptives. Diversifying options in areas that may be over-reliant on one method could help increase contraceptive use, particularly when the most used method is permanent. To widen access, we urge policymakers to use these estimates to look at how contraceptive choice interacts with age and marital status in their countries.” [2]

Finally, the authors note some limitations of their study. The criteria used to identify women in need of contraception may not capture certain women in need, including women who underreport sexual activity due to social stigma (for example among unpartnered women or adolescents), women who are not sexually active precisely because they lack contraception, or women who are dissatisfied with their current method of contraception. In addition, the estimates are based on more available data from partnered than unpartnered women.

Writing in a linked Comment, Dr. Manas Ranjan Pradhan, International Institute for Population Sciences, who was not involved in the study, says, “The study noted a total of 1.176 billion women with a need for contraception; of these, 162.9 million had the unmet need, and of those with an unmet need, 56.5% reside in sub-Saharan Africa and South Asia, and 26.5% were aged 15-24 years in 2019. The higher unmet need among adolescent partnered women is a risk for unintended pregnancies, affecting their subsequent socioeconomic empowerment. The Socio-demographic Index influences the mCPR [modern contraceptive prevalence rate] and demand satisfaction among teenagers, probably due to vast inequalities. Nonetheless, this may delay reaping the contraception-induced socioeconomic benefits of education and work. The study reinforces the calls for tailored adolescent-friendly program implementation strategies in countries with high unmet needs among younger women.”

This study was funded by the Bill & Melinda Gates Foundation. It was conducted by researchers from the Institute for Health Metrics and Evaluation, University of Washington, United States.

[2] Quote direct from author and cannot be found in the text of the Article.

For interviews with the Article author, please contact: [email protected]. Measuring contraceptive method mix, prevalence, and demand satisfied by age and marital status in 204 countries and territories, 1970–2019: a systematic analysis for the Global Burden of Disease Study 2019