The Lancet: Alcohol consumption carries significant health risks and no benefits for young people; some older adults may benefit from drinking a small amount of alcohol 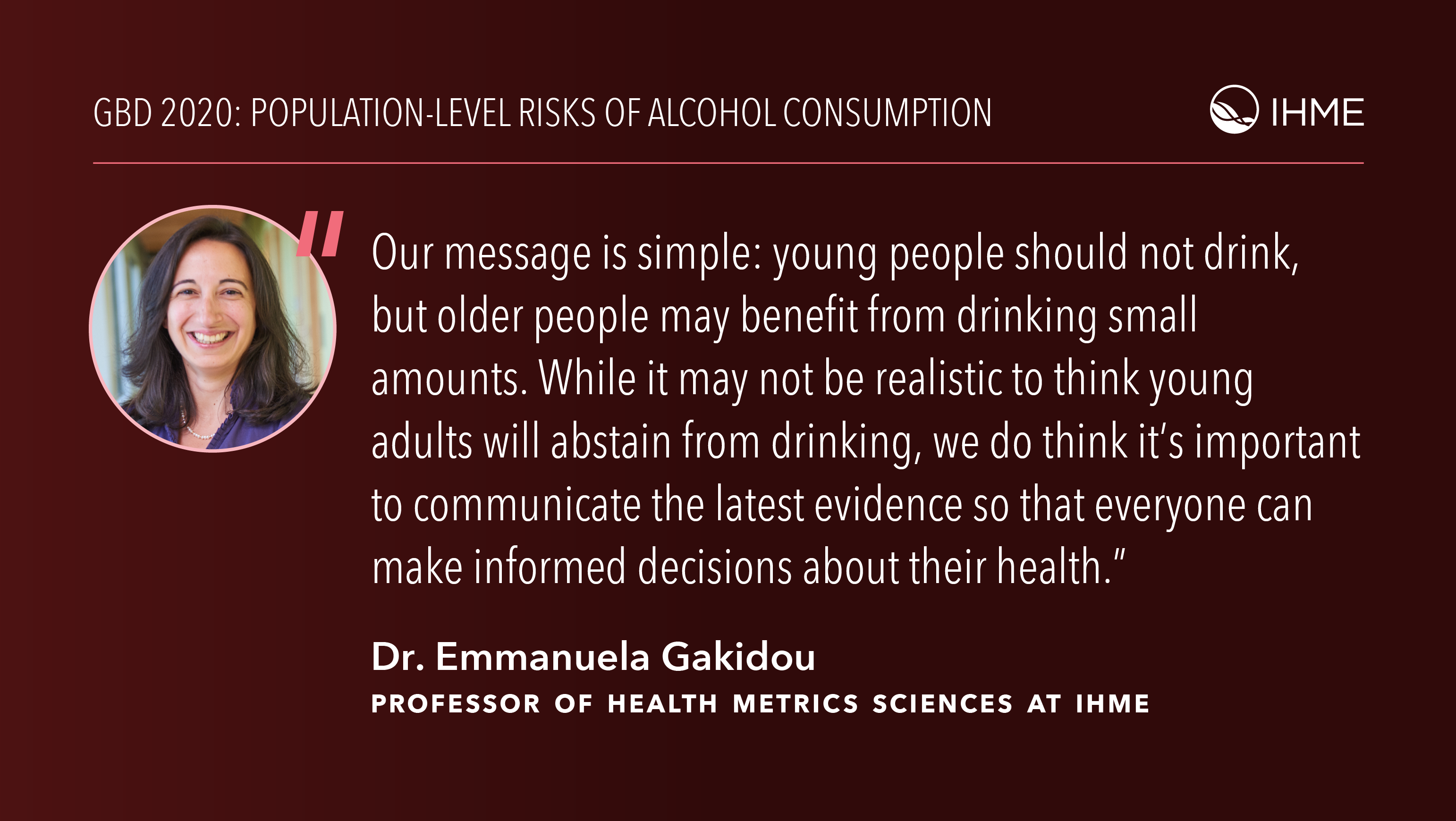 Young people face higher health risks from alcohol consumption than older adults, according to a new analysis published in The Lancet. This is the first study to report alcohol risk by geographical region, age, sex, and year. It suggests that global alcohol consumption recommendations should be based on age and location, with the strictest guidelines targeted toward males between ages 15 and 39, who are at the greatest risk of harmful alcohol consumption worldwide.

The research also indicates that people aged 40 and older without underlying health conditions may see some benefits from small alcohol consumption (between one and two standard drinks per day [1]), including a reduced risk in cardiovascular disease, stroke, and diabetes.

Using estimates of alcohol use in 204 countries, researchers calculated that 1.34 billion people consumed harmful amounts in 2020. In every region, the largest segment of the population drinking unsafe amounts of alcohol were males aged 15–39 and for this age group, drinking alcohol does not provide any health benefits and presents many health risks, with 60% of alcohol-related injuries occurring among people in this age group, including motor vehicle accidents, suicides, and homicides.

“Our message is simple: young people should not drink, but older people may benefit from drinking small amounts. While it may not be realistic to think young adults will abstain from drinking, we do think it’s important to communicate the latest evidence so that everyone can make informed decisions about their health,” says senior author Dr. Emmanuela Gakidou, Professor of Health Metrics Sciences at the Institute for Health Metrics and Evaluation (IHME) at the University of Washington’s School of Medicine. [2]

The researchers looked at the risk of alcohol consumption on 22 health outcomes, including injuries, cardiovascular diseases, and cancers [3] using 2020 Global Burden of Disease data for males and females aged 15–95 years and older between 1990 and 2020, in 204 countries and territories. From this, the researchers were able to estimate the average daily intake of alcohol that minimizes risk to a population. The study also estimates another critical quantity – how much alcohol a person can drink before taking on excess risk to their health compared to someone who does not drink any alcohol.

Overall, the recommended alcohol intake for adults remained low, at between 0 and 1.87 standard drinks per day, regardless of geography, age, sex, or year.

“Even if a conservative approach is taken and the lowest level of safe consumption is used to set policy recommendations, this implies that the recommended level of alcohol consumption is still too high for younger populations. Our estimates, based on currently available evidence, support guidelines that differ by age and region. Understanding the variation in the level of alcohol consumption that minimizes the risk of health loss for populations can aid in setting effective consumption guidelines, supporting alcohol control policies, monitoring progress in reducing harmful alcohol use, and designing public health risk messaging,” says lead author Dana Bryazka, researcher at IHME.

Young men are at greatest risk of harmful alcohol consumption

Using these estimates, the proportion of the population consuming alcohol in amounts exceeding these thresholds by location, age, sex, and year, was also calculated, serving as a guide for targeting alcohol control efforts.

“Although the risks associated with alcohol consumption are similar for males and females, young males stood out as the group with the highest level of harmful alcohol consumption. This is because a larger proportion of males compared to females consume alcohol and their average level of consumption is also significantly higher,” says Dr. Gakidou.

The authors acknowledge some limitations with this paper, including that patterns of drinking were not examined. Therefore, this study did not distinguish between individuals who infrequently engage in heavy episodic drinking and those who consume the same amount of alcohol over several days. Alcohol consumption was also self-reported, which could have introduced bias, and the study could not include data on consumption during the COVID-19 pandemic due to pandemic-related delays with routine data collection, which could also have affected these estimates.

Writing in a linked Comment, Robyn Burton and Nick Sheron of King’s College London (who were not involved in the study) say, “These findings seemingly contradict a previous GBD estimate published in The Lancet, which emphasized that any alcohol use, regardless of amount, leads to health loss across populations. There are three main differences between the two GBD publications. First, the most recent study uses data from 2020 instead of 2016. Second, the relative risk curves for five alcohol-related outcomes have been updated. However, neither of these changes is driving the differences in results. Instead, the differences are due to the novel method of weighting relative risk curves according to levels of underlying disease, alongside the calculation of more disaggregated estimates by sex, age, and geographical region. The causes that contribute to all-cause mortality vary across groups, and this changes the proportional risk of alcohol on mortality. Across most geographical regions in this latest analysis, injuries accounted for most alcohol-related harm in younger age groups. This led to a minimum risk level of zero, or very close to zero, among individuals aged 15–39 years across all geographical regions. This is lower than the level estimated for older adults, due to a shift in alcohol-related disease burden towards cardiovascular disease and cancers. This highlights the need to consider existing rates of disease in a population when trying to determine the total harm posed by alcohol.”

This study was funded by the Bill and Melinda Gates Foundation. A full list of GBD 2020 Alcohol Collaborators is available in the paper.

The labels have been added to this press release as part of a project run by the Academy of Medical Sciences seeking to improve the communication of evidence. For more information, please visit: http://www.sciencemediacentre.org/wp-content/uploads/2018/01/AMS-press-release-labelling-system-GUIDANCE.pdf. If you have any questions or feedback, please contact The Lancet press office at [email protected]

[1] One standard drink is defined as 10 grams of pure alcohol. Examples include:

[2] Quote direct from author and cannot be found in the text of the Article. Drinking alcohol has signiﬁcant health risks for young people, small amounts may be beneﬁcial for some older adults

New analysis suggests that recommendations for how much one can  drink should be based on age and local disease rates. Population-level risks of alcohol consumption by amount, geography, age, sex, and year: a systematic analysis for the Global Burden of Disease Study 2020

Small amounts of alcohol might lower the risk of some health outcomes but increase the risk of others, suggesting that the overall risk depends, in part, on background disease rates, which vary by ...