The Lancet: Almost half of global cancer deaths are due to risk factors, with smoking, alcohol use, and high BMI the greatest contributors 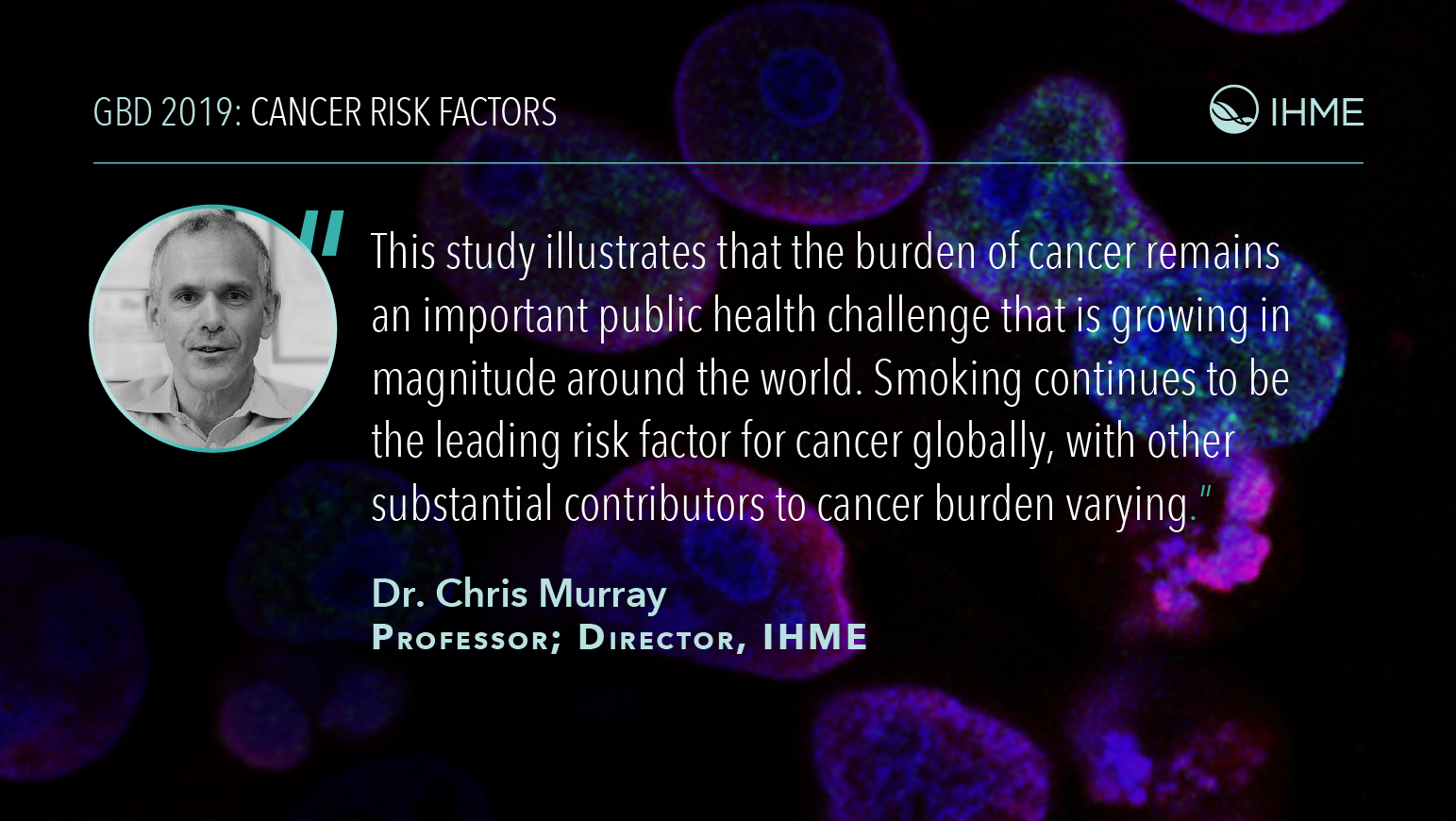 Smoking, alcohol use, high BMI, and other known risk factors were responsible for nearly 4.45 million global cancer deaths in 2019, according to new research published in The Lancet using the Global Burden of Diseases, Injuries, and Risk Factors (GBD) 2019 study.

The new study is the first to estimate how a comprehensive list of risk factors contribute to cancer deaths and ill health globally, regionally, and nationally, across age groups, for both sexes, and over time.

Despite being the second leading cause of death worldwide after cardiovascular disease, to date most studies of cancer burden have analysed single risk factors globally or multiple risk factors in select countries.

“This study illustrates that the burden of cancer remains an important public health challenge that is growing in magnitude around the world. Smoking continues to be the leading risk factor for cancer globally, with other substantial contributors to cancer burden varying,” said Dr. Christopher Murray, Director of the Institute for Health Metrics and Evaluation (IHME) at the University of Washington’s School of Medicine and a co-senior author of the study. “Our findings can help policymakers and researchers identify key risk factors that could be targeted in efforts to reduce deaths and ill health from cancer regionally, nationally, and globally.”

Using results from the GBD 2019 study [2], the authors investigated how 34 behavioral, metabolic, and environmental and occupational risk factors contributed to deaths and ill health due to 23 cancer types in 2019. Changes in cancer burden between 2010 and 2019 due to risk factors were also assessed. Estimates of cancer burden were based on mortality and disability-adjusted life years (DALYs), a measure of years of life lost to death and years lived with disability.

The leading cause of risk-attributable cancer death for both men and women globally was tracheal, bronchus, and lung cancer, which accounted for 36.9% of all cancer deaths attributable to risk factors. This was followed by colon and rectum cancer (13.3%), esophageal cancer (9.7%), and stomach cancer (6.6%) in men, and cervical cancer (17.9%), colon and rectum cancer (15.8%), and breast cancer (11%) in women.

When examining environmental and occupational risks, researchers found that the cancer attributable DALYs were three-fold higher among males (3.9%) than females (1.3%), suggesting that males may be more likely than females to work in places that have higher risk of being exposed to carcinogens.

Ill health attributed to environmental and occupational, behavioral, and metabolic risk factors increased with age, peaking in the 70s depending on countries’ Socio-demographic Index (SDI), with countries on the higher end of the spectrum tending to peak at later ages.

In 2019, cancer deaths (25.4%) and risk-attributable cancer deaths (26.5%) globally occurred disproportionately in high SDI countries, although these countries only accounted for 13.1% of the global population. The five regions with the greatest cancer death rates due to risk factors were Central Europe (82.0 deaths per 100,000 population), East Asia (69.8 per 100,000), high-income North America (66.0 per 100,000), Southern Latin America (64.2 per 100,000), and Western Europe (63.8 per 100,000). Patterns of cancer deaths and ill health due to environmental and occupational, behavioral, and metabolic risks differed around the world, with unsafe sex a leading risk factor for ill health in locations at the lower end of the SDI spectrum. Country-level data are available via online resources. [2]

The authors acknowledge some limitations to their study that are mostly inherently in the data sources and knowledge available. Due to a lack of data, there is greater uncertainty regarding estimates for lower SDI countries compared with higher SDI countries. Expanding data availability on risk factors and cancer burden is crucial to providing location-specific information and improving estimates. The risk factors included in the study are based on current knowledge, but as knowledge expands, additional risk factors may need to be included in future studies. Results from the GBD 2019 study were estimated prior to the COVID-19 pandemic, and therefore evaluating its impact on risk-attributable cancer burden is an important area for future research.

Writing in a linked Comment, Professor Diana Sarfati and Dr. Jason Gurney of the University of Otago, New Zealand, who were not involved in the study, say: “The primary prevention of cancer through eradication or mitigation of modifiable risk factors is our best hope of reducing the future burden of cancer. Reducing this burden will improve health and well-being, and alleviate the compounding effects on humans and the fiscal resourcing pressure within cancer services and the wider health sector.” On links between cancer risk and poverty, they say: “It is no accident that behaviors associated with higher risk of cancer are patterned according to poverty, particularly within countries. Poverty influences the environments in which people live, and those environments shape the lifestyle decisions that people are able to make. Action to prevent cancer requires concerted effort within and outside the health sector. This action includes specific policies focused on reducing exposure to cancer-causing risk factors, such as tobacco and alcohol, and access to vaccinations that prevent cancer-causing infections, including hepatitis B and HPV.”

This study was funded by the Bill & Melinda Gates Foundation. It was conducted by the GBD 2019 Cancer Risk Factors Collaborators.

For interviews with the Article author, please contact: [email protected] The global burden of cancer attributable to risk factors, 2010–19: a systematic analysis for the Global Burden of Disease Study 2019