“Fighting disease and fighting poverty go together,” says Agnes Binagwaho, Rwanda’s Minister of Health. “If we just give pills, we will never end disease.”

Dr. Binagwaho is using Global Burden of Disease data to improve the health of Rwandans in two major ways: directly, by using GBD results to prioritize policy and health focus areas, and collaboratively, by training Ministry of Health staff to better understand these measures and metrics, and by sharing data collected locally to improve GBD estimates.

Dr. Binagwaho, a pediatrician, has served as Minister of Health since 2011. She sees health and development as inextricably linked and is committed to using evidence to improve health. Dr. Binagwaho made her case for a more effective public health program during a UCL-Lancet lecture: “Poverty, HIV, malaria, infant death…are linked. So if you really want to tackle HIV, you should go for comprehensive development,” she says.

Dr. Binagwaho’s commitment to acting on data has shaped the philosophy of Rwanda’s health ministry.

In 2013 she sent two disease and planning specialists to receive intensive training on GBD, and they in turn conducted trainings among ministry heads charged with leading strategy development for different health conditions in Rwanda. The result is a team of technically capable people with a deep understanding of Rwanda’s disease burden. Several people in Rwanda’s Ministry of Health, in addition to Dr. Binagwaho, have become expert collaborators on the GBD study.

Dr. Binagwaho regards Global Burden of Disease data as a universal language for policy decision-making in the health sector. “We can see by studying those [GBD] figures where the next problem is – and we can start to work on it,” she maintains. The minister uses GBD data to support arguments for policy and funding priorities to better align with what ails Rwandans now and likely will in the future. 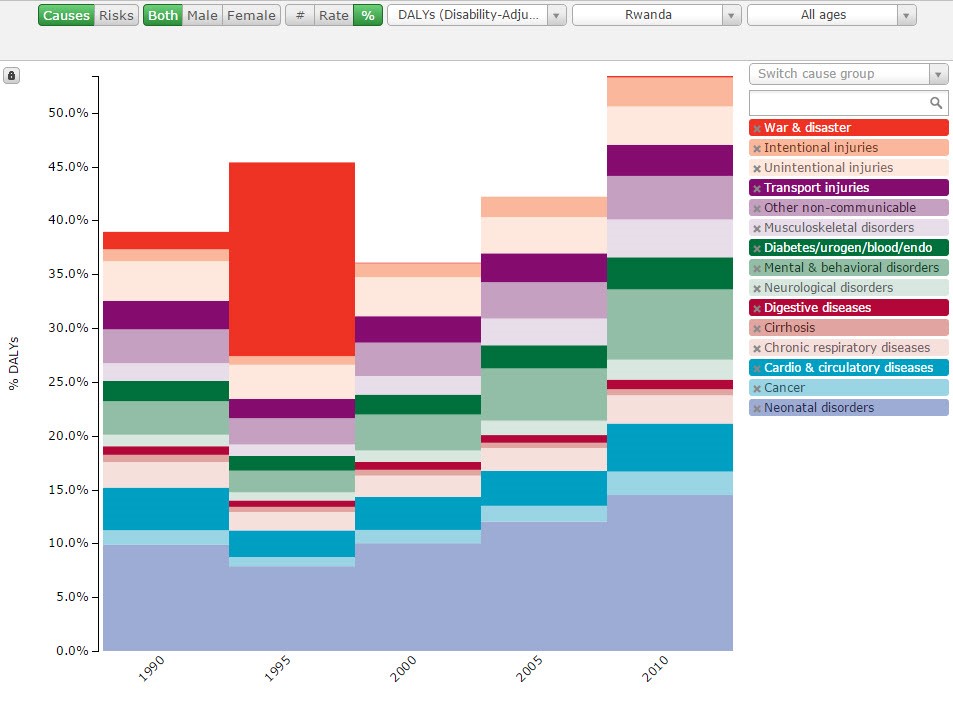 In 2000, diarrhea and lower respiratory infections (LRI) were responsible for nearly a quarter of Rwanda’s disease burden. By 2010, that number had decreased substantially, to just over 15%. During the same period, the proportion of DALYs caused by non-communicable diseases, including neonatal disorders, cancers, and mental disorders, increased considerably. Neonatal disorders were responsible for 10% of Rwanda’s DALYs in 2000, and by 2010 that proportion had grown to 14% – just behind diarrhea and LRI. Dr. Binagwaho is using these patterns, and the visualization tools that help make the data concrete, to highlight the changing priorities of her health ministry to care for her people’s changing health needs.

“The question is how will it serve the most vulnerable first? It is citizen-centric governance. And this is my work,” says Dr. Binagwaho. “If you tackle the problem lying with the most vulnerable, you tackle the problems for the whole population.” With this in mind, and partly because GBD pinpointed household air pollution as the leading risk factor for premature death and disability in the country in 2010, Rwanda started a program to distribute one million clean cook stoves to the country’s most vulnerable households.

“My target is not my grandchild,” Dr. Binagwaho says. “My target is the child of the poorest woman in Rwanda, because when she is served, that means everyone else will be as well.”

Agnes Binagwaho used data to improve the health of Rwanda’s families. What problem will the next Roux Prize winner tackle with evidence? Submit your nomination for the Roux Prize today.