Earlier this month, the GBD 2015 Tobacco Collaborators published a new report on smoking prevalence and the global burden of tobacco use in The Lancet. Michael Bloomberg commented on the value of the publication for policymaking, “Data on smoking trends is essential to continuing the progress we’re making reducing the death toll from tobacco. The more we know, the better we can target our efforts, the greater incentive national governments have to take action, and the more death and disease we can prevent.”

The good news from the report is that efforts to scale up tobacco control have resulted in many success stories and reductions in smoking prevalence across the globe. The more sobering news is that smoking remains a leading risk for early death and disability worldwide, and because of population growth, the actual size of the tobacco burden is on the rise.

The report found that tobacco was the second-leading risk factor for early death and disability globally in 2015, causing 6.4 million deaths worldwide. And as Joanna Cohen – Director of the Institute for Global Tobacco Control (IGTC) at Johns Hopkins Bloomberg School of Public Health – points out, “Cigarettes continue to have a deep toll on public health – the number of daily smokers around the world continues to rise, with over 930 million people smoking cigarettes daily in 2015,” pointing to “the urgent need to develop and fully implement proven tobacco control policies to save lives.” 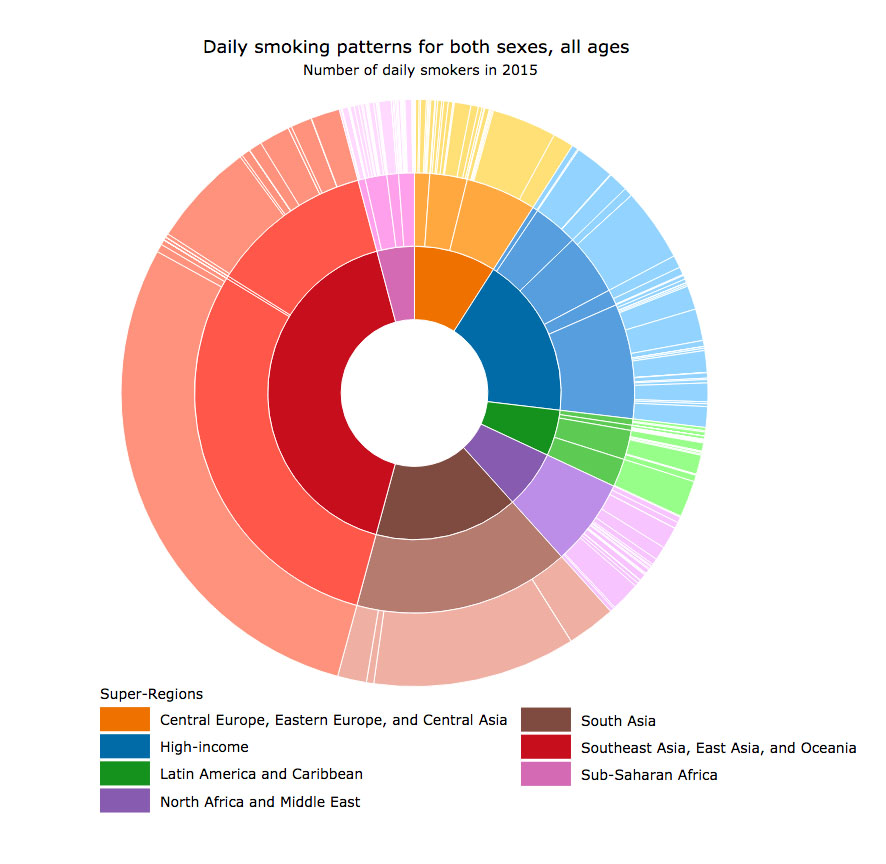 Yet the data also show how dramatic success stories are possible, given attention to the trends, proven policy interventions, and political will. Brazil, for example, has emerged as a leader in tobacco control, boasting the third-largest overall decline in age-standardized smoking prevalence since 1990: a drop of 57% among men, and 56% among women. India has also taken action, implementing many new tobacco control measures that have led to a 3% reduction in smoking among Indian men each year from 2005 to 2015 – a drop that is twice as fast as in the previous decade. Among Indian women, where the number of smokers had been increasing from 1990 to 2005, it then fell by 2% a year from 2005 to 2015. And in eighteen countries – including Nepal, Chile, and Ukraine – the speed at which smoking prevalence is declining accelerated in 2005–2015 compared to the previous decade.

The juxtaposition of these success stories with the ongoing and profound health burden of tobacco paints a vivid picture of the future: on one hand, the looming costs – in both economic terms and numbers of lives lost – while on the other, a very real potential to change the situation. As José Luis Castro, President and CEO of Vital Strategies puts it, “IHME’s study on global tobacco use confirms that political will is all that stands between millions of needless deaths and billions of dollars in economic costs.  Despite the human and economic cost of the tobacco epidemic on track to increase, there have been significant pockets of progress where governments have taken decisive action.... IHME’s report is a clarion call for governments to redouble their efforts.”

Successful and proven policy interventions exist. As Dr. Frank J. Chaloupka, Distinguished Professor of Economics and Public Health and Director of the Health Policy Center at the University of Illinois at Chicago, remarked, “Substantial increases in the tax and price of tobacco products have consistently shown to be the most effective tool for reducing tobacco use, and played a key role in the declines sustained by Australia, the US, and Brazil.” Other successful policy measures include placing bans on smoking in public places, restricting the marketing and promotion of cigarettes, community-wide and nationwide smoking cessation interventions, and mandatory warning labels on tobacco products. And as Matthew L. Myers, President of the Campaign for Tobacco-Free Kids, confirmed, “With sustained commitment to implementing proven measures to reduce tobacco use, governments can help curb a global epidemic projected to kill 1 billion people this century. Countries that have acted decisively to implement policies like those called for in the FCTC [WHO’s Framework Convention on Tobacco Control] have seen the most dramatic drops in tobacco use.”

Yet implementing these strategies intelligently and effectively will require continued attention to the data on health trends and patterns. The recent paper from the GBD 2015 Tobacco Collaborators is a huge step forward in this regard, making data available that are not only accurate and comprehensive, but also directly useful for governments and policy decision-makers. For instance, the authors have introduced several novel and innovative insights, such as providing information about when people are starting or quitting the habit, which in turn allows for more targeted prevention or cessation campaigns. Their research also helps policymakers disentangle the effects that different factors have on smoking patterns in their region – be it population growth, population aging, existing efforts to address smoking, or some combination of these factors. Meanwhile, the new analysis of smoking across levels of development provides a global view of where the epidemic is concentrated, with fascinating results: the authors found that the majority of male daily smokers are concentrated in middle-income countries, but the majority of female smokers are in high-income countries.

Different populations will require different strategies, and these fine-grained analytics allow policymakers to better understand what is driving change in their regions – and thus to plan accordingly. Continued monitoring and data collection will thus be just as crucial as other interventions for consolidating and continuing the gains made to date, and reducing the health burden for the future.

In addition to the study, IHME has updated its data visualization tool to reflect data through 2015. You can explore the data interactively at http://vizhub.healthdata.org/tobacco/.

The open-access research article, published in The Lancet, is available at http://www.thelancet.com/journals/lancet/article/PIIS0140-6736(17)30819-X/fulltext?elsca1=tlxpr.