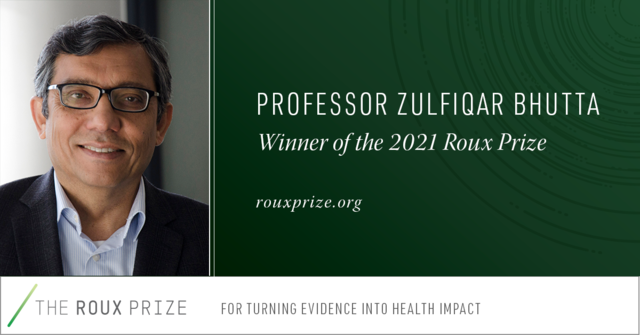 Professor Zulfiqar Bhutta, of Aga Khan University (AKU) and The Hospital for Sick Children (SickKids), has been awarded the 2021 Roux Prize, a US$100,000 award for turning evidence into health impact. He is the founding director of the Centre of Excellence in Women and Child Health and the Institute for Global Health and Development at AKU; and Co-Director of the SickKids Centre for Global Child Health, Inaugural Robert Harding Chair in Global Child Health and Policy, and a Senior Scientist in the Child Health Evaluative Sciences program at SickKids. His work has made an integral contribution to global policy to improve maternal, fetal, and newborn health.

“Professor Bhutta has had a tremendous impact on maternal and child health, as a researcher and a leader,” said Dave and Barbara Roux. “We are thrilled to honor his incredible work and commitment to reducing health inequities.”

Professor Bhutta’s work has focused on newborn and child survival and undernutrition, with a particular emphasis on reducing health disparities and reaching underserved populations, including health care in conflict settings and humanitarian emergencies. He has played a crucial role in developing global consensus on interventions to address undernutrition in mothers and children, with publications that have informed World Health Organization (WHO) policy and global funding priorities. With his research team, he published guidance to prevent stillbirths and improve newborn survival that now is a core part of the Global Every Newborn Action Plan.

“Professor Bhutta has been at the forefront of generating relevant evidence for public health policies in low- and middle-income countries,” said Soumya Swaminathan, Chief Scientist at WHO. “He is one of a handful of people globally who have successfully conducted large randomized controlled trials, which have resulted in changes in policy and practice, leading to significant improvements in health outcomes.”

Professor Bhutta was one of the first AKU faculty, and since beginning his career there in 1986, has managed to build a large research program on maternal and child health and nutrition with national and global impact, despite the challenges of political turmoil and economic insecurity in the country.

Between 1996 and 2002, he undertook a community outreach and research program in an urban slum of Karachi and several rural areas of Pakistan, and for the past 15 years he has collaborated with the government of Pakistan to assess effectiveness of health care in real-world settings through partnering with public sector community health workers.

Many of these large community-based cluster randomized trials led by Professor Bhutta have generated findings that changed global policy, most notably the finding that using chlorhexidine for cord care among home births was associated with significant reduction in the risk of neonatal sepsis and death, and that public sector community health workers could successfully work with communities to reduce perinatal mortality. His team also worked with community health workers in the conflict affected and insecure areas of Pakistan to improve polio and routine immunization coverage.

“Dr. Bhutta is a powerhouse of knowledge,” said Dr. Adil Haider, Dean of the Medical College at Aga Khan University. “His contribution to the field of medicine and research as a whole is invaluable, with his exceptional work having phenomenal impact not just at the Aga Khan University, but across Pakistan and truly around the globe. It has been an absolute pleasure getting to work alongside him, learning from him, and marveling at his zeal and determination. He strives for excellence in everything he does, and I cannot think of anyone more deserving of this prestigious award.”

Professor Bhutta has taken on unique joint appointments at SickKids and the SickKids Centre for Global Child Health, in addition to his role with AKU. He has succeeded in creating strong international collaborations and growing support for research on maternal and child health, and currently leads a consortium of 14 academic centers worldwide focused on improving health care for women and children in areas affected by conflict.

“Dr. Bhutta is one of the world’s foremost experts in child and maternal health and nutrition studies, whose contributions have led to direct and significant impact on health care and policy in communities worldwide,” said Dr. Stephen Scherer, Chief of Research at SickKids. “SickKids is proud to be home to Dr. Bhutta’s groundbreaking translational research, which not only exemplifies our vision of ‘Healthier Children. A Better World,’ but continues to have a profound impact in science and in the lives of people around the world.”

Professor Bhutta is a designated Distinguished National Professor of the Government of Pakistan and the co-Chair of the Maternal and Child Health oversight committee of the WHO’s Eastern Mediterranean Regional Office.

“Congratulations to Dr Bhutta for this important award and recognition for his contribution as an advocate, a researcher, and a passionate practitioner on maternal and child health and nutrition,” said Dr. Ahmed Al Mandhari, WHO Regional Director for the Eastern Mediterranean Region. “His striving to translate data to information and his operational research into policy and best practices, from Pakistan to global-level commissions, is commendable as he brings in tremendous value reflecting priorities and challenges from the field programs level, clinical practice, and community-based projects in addition to his commitment to polio eradication efforts in our region.”

“Professor Zulfiqar Bhutta is one of the outstanding child health researchers of his generation,” said Richard Horton, editor-in-chief of The Lancet. “His work on child survival and nutrition has shaped international policy and practice for two decades. He has built a world-class team of child health scientists in Pakistan, conducted groundbreaking primary research to advance children’s health, and used that evidence to provide a rigorous and reliable foundation for advocacy and action. He richly deserves the recognition provided by the Roux Prize.”

Nominations for next year’s prize will open in November 2021. Details on the nomination process for the Roux Prize are available at www.rouxprize.org. Questions about the prize can be sent to [email protected].