COVID-19 | The Myth of Herd Immunity

This transcript has been lightly edited for clarity

What is herd immunity? It’s a concept that comes from modeling of infectious diseases, and it’s the idea that at some point enough people have been infected or in the future vaccinated such that it’s hard to have the virus continue transmitting through the community. It runs out of people that are susceptible.

Now the level at which the cumulative infection or vaccination (a fraction of people in those categories) that has to occur in order to get herd immunity is a function of both the virus itself, in this case COVID, and the community it’s transmitting in. In a dense place like New York City with a lot of underground public transport, that level is going to be higher because the virus can transmit more easily. And in a rural place like Wyoming, that level will be much lower.

Herd immunity is also being used right now by various people in the public sphere, for example the government of Sweden, as a strategy for dealing with COVID. And basically, as a strategy, it means do nothing if you’re the government – just let the virus run through the population, let it take its death toll, and then at some point you will reach a point where there’s no more people to be infected and to die. So it’s really just letting the virus run, as a strategy.

Now, some people think there’s a lot of people that are immune from COVID-19 because of past exposure to the common cold, many of which are caused by coronaviruses. In fact, there are claims out there that 80% of Americans and Europeans have that sort of immunity, and we know that cannot be true. There’s a number of quote ‘natural experiments’ that tell us that a very small fraction, if any, have some sort of immunity. Perhaps the most direct is the Charles de Gaulle aircraft carrier in the French Navy, where in a healthy young population, 70% of the sailors on that aircraft carrier became infected. So, clearly, no background immunity because it’s very close to what you would’ve expected for herd immunity. And then we have communities where the fraction of the population that has been infected is really quite high, for example Manaus, a city in the state of Amazonas in Brazil. It appears that 66% have already been infected. And we know there’s quite high infection rates with still ongoing epidemics in places like Ecuador, Peru, and Mexico City where more than 40% have already been infected and the epidemic is still ongoing.

Another idea that’s associated with herd immunity is that the peaks of transmission, the peaks of cases and deaths that occurred mostly in April in Europe and in New York were due to those communities reaching herd immunity. That is simply just not the case. There is a much more direct and scientifically accurate explanation. Namely, the whole world – pretty much every country in the world except two – put on social distancing mandates in the last two weeks of March. And about three to four weeks after putting social distancing mandates in place, we would expect and did observe a peak in cases and deaths. And in the Southern Hemisphere, there were some large epidemics that occurred well later, in May and June, and we believe that those epidemics occurred because of seasonality – that was their winter in the Southern Hemisphere – and that was enough to overcome the social distancing mandates that were in places in those places.

We can look at the data for all the large epidemics and color the graphs by latitude. And when you do that and look at these curves where the X axis is months of this year, you see a lot of Northern Hemisphere epidemics peaking in late March and in April, and then as we progressed through less and less severe epidemics, you see that there’s many epidemics in the sort of equatorial regions and in the Southern Hemisphere that take off late-May and reach a peak in June, July, and August. It’s really that pattern where there is this delayed effect because those places put in place social distancing mandates when they really didn’t have a large epidemic occurring. Again, it’s this clear evidence that what led to the peaks was not herd immunity – it was the imposition of mandates. If you put the mandates on when nothing much had yet occurred, then you ended up with a smaller but delayed epidemic.

Now the other evidence that herd immunity wasn’t the reason for the peaks is the places we’re seeing with multiple peaks. Take Serbia, shown on this slide. There was a peak of deaths in April and social distancing mandates brought the epidemic down, the public became less vigilant, and we had a second peak in July and August, and now that has come down as well.

Take Iran, where the evidence shows they’re now entering their third peak that’s starting to unfold. So you get this behavioral rollercoaster where social distancing mandates led to reductions in transmission, people start interacting more – particularly young people in the case of Iran and other countries – you get a huge explosion of cases and deaths, then re-imposition of mandates, people become more cautious, the epidemic comes down, and that cycle repeats.

What we’re seeing now in France, and I’ll show you Madrid in the moment, is a huge second surge. So, clearly not at herd immunity, and cases are shooting up and deaths are starting to follow. And here’s Madrid, the last example of this, where cases are now above where they were in April, and deaths have started to follow the big uptick in cases. So clearly the peaks back in April were not due to reaching herd immunity. And as we’ll talk in a later video, there is a winter surge coming, driven largely by seasonality but in part also by people becoming less vigilant.

So a question that lots of people have is, are there some communities that are close to herd immunity now? And despite just passing the grim milestone of a million deaths globally from COVID, we think very few populations are close to herd immunity. There’s some perhaps neighborhoods in New York City that may be close to 65%, there’s Manaus as we’ve already talked about, there are some cities in Ecuador where that may also be true. But given what we’ve seen in those places, given what we know about the potential to get up to 70% infected like the Charles de Gaulle aircraft carrier, our best estimate of when herd immunity will actually kick in would be 50% community infection as the most optimistic view, and much more realistically it would be 65% of the population being infected.

If you look at this global map which shows the estimate of the population that’s infected today, you can see the highest rates are in Ecuador, parts of Brazil, in Peru, Mexico City, some other parts in Central America where they are in 30% and as high as 40% infected, but not 65% at the state or national level. So we have a very long distance to go in the epidemic before we get to herd immunity.

On the way to herd immunity, if we don’t get a vaccine – and we are all hopeful we will – but if we don’t, we can calculate how many people would have to die if we end up at herd immunity through people being infected as opposed to vaccinated. And the way we can do that is that we have very good data now on the infection fatality rate by taking all these population-based antibody surveys, comparing to the deaths in those communities, figuring out on an age-specific basis what is the fraction of people infected in each age group who would die from COVID, and applying that to the population age structure in each country.

When you do that, you get these sort of numbers. Now, this is in the absence of vaccination, or a breakthrough in treatment – both of which may happen, and we hope that it will sometime in 2021. But if not, even in the most optimistic scenario around herd immunity, we would expect about 13 million deaths globally and 1 million deaths in the United States. So that way of thinking about herd immunity suggests that despite the horrific death toll already – the 200,000+ deaths in the United States and 1 million+ deaths globally – we have a very long distance to go in the COVID-19 epidemic unless we can get a vaccine out, and unless there’s a breakthrough in treatment. 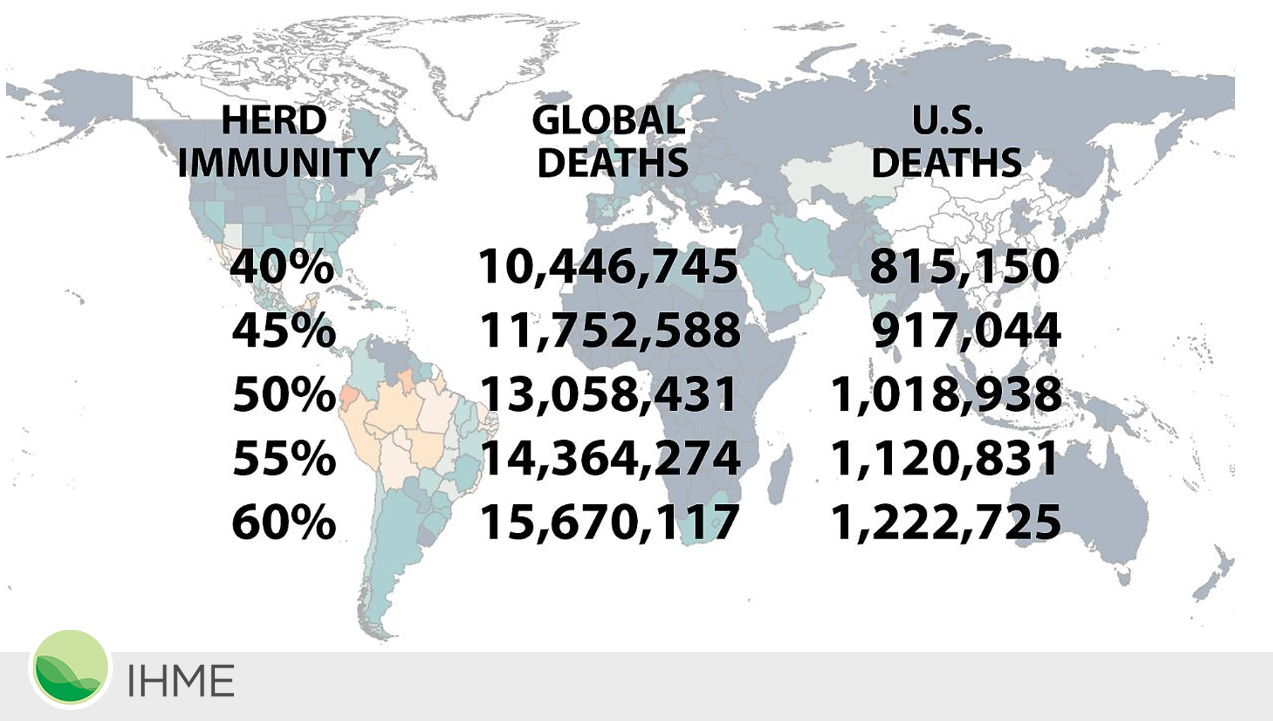 So what about a vaccine? Well, we know the full winter surge has begun in Europe, and we expect it to unfold in the US this month, in October. Now, an effective vaccine would make a really big difference, and we are hopeful that the trials – some of which should start to show results by the end of October or November – will tell us that there are effective RNA vaccines, and then eventually protein vaccines. And then the big issue will be, how effective are they? And then, how quickly can you scale up production? Everything we know from industry about the speed of production strongly suggests that vaccination will have no effect on the epidemic in this calendar year, maybe some effect on the United States in the first quarter of next year, and then likely a substantial effect in the US and in some other countries as well in the second quarter of 2021.

So for now, our best strategy is to focus on the things we know work and we’ve seen them work over and over: when people are careful, they stay six feet away from others, and they wear a mask. That can make a really profound impact on the death toll we will see in the world.

So to conclude, herd immunity is when enough people have either been infected or vaccinated that it’s going to stop the transmission of the virus. As a strategy, it simply means letting an awful lot of people die because we let the virus spread through the whole population, and it’s not really a strategy at all. We have not reached, nor are we close to reaching herd immunity in the US or in Europe, and vaccines will hold the potential to bring about herd immunity without so many deaths in 2021.

We plan to incorporate vaccination into our model results – because we think they’ll make a difference – by the end of October. So for our November releases of the model, it will reflect our expectation of vaccination coverage. In the meantime, the key recommendation is to wear a mask and stay socially distant wherever possible. Thank you very much.