In Norway, burden of disease informs public and policymakers on health status and risks

In Norway, the government is helping improve the science behind the Global Burden of Disease (GBD) study and incorporating it into their decision-making.

“In Norway, the GBD study provides for the first time a comprehensive overview of more than 300 diseases and injuries and close to 80 risk factors. Particularly on disability and importance of risk factors this is an important step forward to inform policymakers and the public,” said Professor Stein Emil Vollset, Director of the Centre for Disease Burden at the Norwegian Institute of Public Health (NIPH).

NIPH established a Centre for Disease Burden under Vollset’s leadership in 2015. The Centre started as a pilot but became one of two permanent centers within NIPH in November 2016. The Centre’s mission is to produce health statistics and research in priority areas in coordination with the IHME-led Global Burden of Disease network. In addition, the Centre coordinates burden of disease work across departments at the NIPH, and acts as a resource on GBD to other government agencies.

Vetting the methods and findings of the GBD study has been a key part of the process of incorporating GBD into Norway’s government health research activities. A total of 28 researchers from NIPH reviewed the GBD findings, commented on the strengths and weaknesses of the estimates, and elaborated on the results for Norway in GBD 2013. These findings were published in a 200-page report entitled Disease Burden in Norway 1990–2013. IHME also collaborated with NIPH to publish simultaneously a summary report highlighting the main findings of the GBD study for Norway, Norway: State of the Nation’s Health: Findings from the Global Burden of Disease. 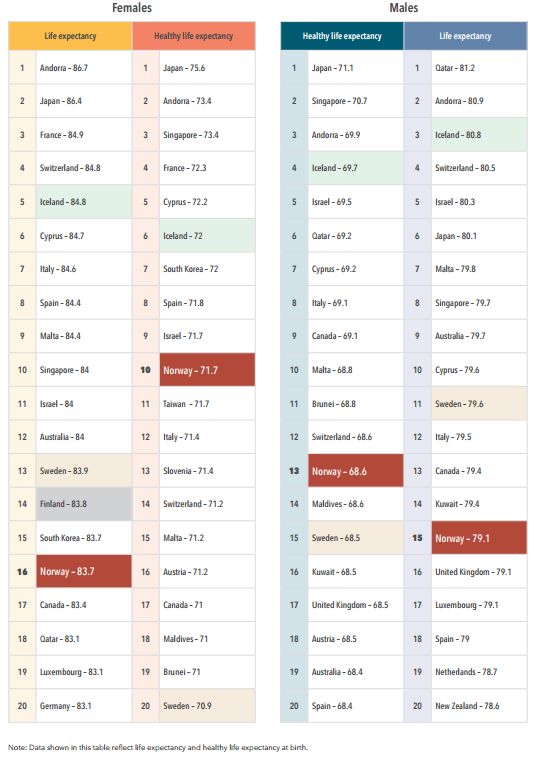 Top 20 countries with the highest life expectancy and healthy life expectancy in the world, 2013. From Norway: State of the Nation’s Health: Findings from the Global Burden of Disease.

The report was launched at an event in March 2016 by the Director General of NIPH, Camilla Stoltenberg. In addition to providing experts’ reviews of the GBD results, the report also summarized the main GBD findings for Norway.

“The great advantage of the ‘GBD approach’ to health statistics is that it combines what may be the largest global collection of health data with tailored methodology for data management and statistical analysis and presentation to produce, for 188 countries, a comprehensive overview of mortality and health loss for a detailed list of diseases, injuries, and risk factors,” said Dr. Camilla Stoltenberg during the March launch event.

The launch of the GBD findings in Norway received extensive coverage by the Norwegian media and was featured in more than 50 news articles.

The Norwegian Directorate of Health, Norway’s health policymaking body, has included GBD findings in its reports and uses the study’s findings to inform health policy decisions. The three reports they have published that incorporate GBD data are titled (translation) Social Cost of Illness and Accidents in 2013 – Disease Burden, Health Care Costs and Lost Production Distributed by Disease Groups; Fruits and Vegetables in Schools – Economic Assessments 2015; and Societal Gains from Following the Directorate of Health’s Nutrition Consultations.

Going forward, the Centre for Disease Burden, IHME, and the GBD network are working to make GBD research even more useful for health policymaking in Norway. They are collaborating to estimate burden of disease at the local level across the country, and plan to analyze differences in burden of disease across different socioeconomic groups. This partnership will ensure that GBD research remains a valuable tool for informing decision-making and the public in Norway for years to come.