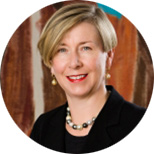 Ms. Halton is the Chair of the Board of CEPI and is a member of the Advisory Boards of the Australia and New Zealand Banking Group (ANZ Bank), Clayton Utz, and the Australian Strategic Policy Institute. She is also a member of the Interim Board Coalition for Epidemic Preparedness Innovations.

She was awarded the Public Service Medal in 2002, the Centenary Medal in 2003, and the Geneva Health Prize in 2013. In 2016, Ms. Halton became one of a small number of international members elected to the National Academy of Medicine in the United States.