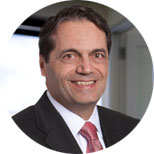 Stephen Cucchiaro is President and Chief Investment Officer at 3Edge Asset Management. Mr. Cucchiaro is known for his use of proprietary investment research methods including the application of concepts from engineering, system dynamics, and complexity economics in order to analyze the cause and effect relationships that drive the global capital markets. The firm’s approach seeks to blend scientific methodology with sound judgment and practical experience while also recognizing the importance of behavioral factors when making investment decisions. The firm’s approach also utilizes a research and investment process developed by Mr. Cucchiaro that applies a multi-player game theory framework to better understand how policy actions by different actors and agents in both the public and private sectors could materially influence the future direction of the global capital markets.

Mr. Cucchiaro began managing investment portfolios in 1994. He was the founder and served as President and Chief Investment Officer of Windward Investment Management, which was acquired by Charles Schwab in November 2010. At the acquisition, Windhaven Investment Management continued the business of Windward. From the early days of Windward through June 2014, assets under management under Mr. Cucchiaro’s tenure grew from less than $100 million to nearly $20 billion. After more than three years working toward a successful transition following the acquisition, Mr. Cucchiaro left Windhaven in June of 2014.

Mr. Cucchiaro has appeared on Bloomberg TV and Radio, CNBC, and the Nightly Business Report, and has been quoted in The Wall Street Journal, Barron’s, The Financial Times, Forbes, and Businessweek.

Mr. Cucchiaro has an SB in Mathematics from MIT and an MBA in Finance from the Wharton School at the University of Pennsylvania. During the late 1970s, Mr. Cucchiaro was a member of the US Olympic Team in yacht racing and became national champion of his class in 1978 and Gold Medalist in the 1979 Pan American Olympic Games.