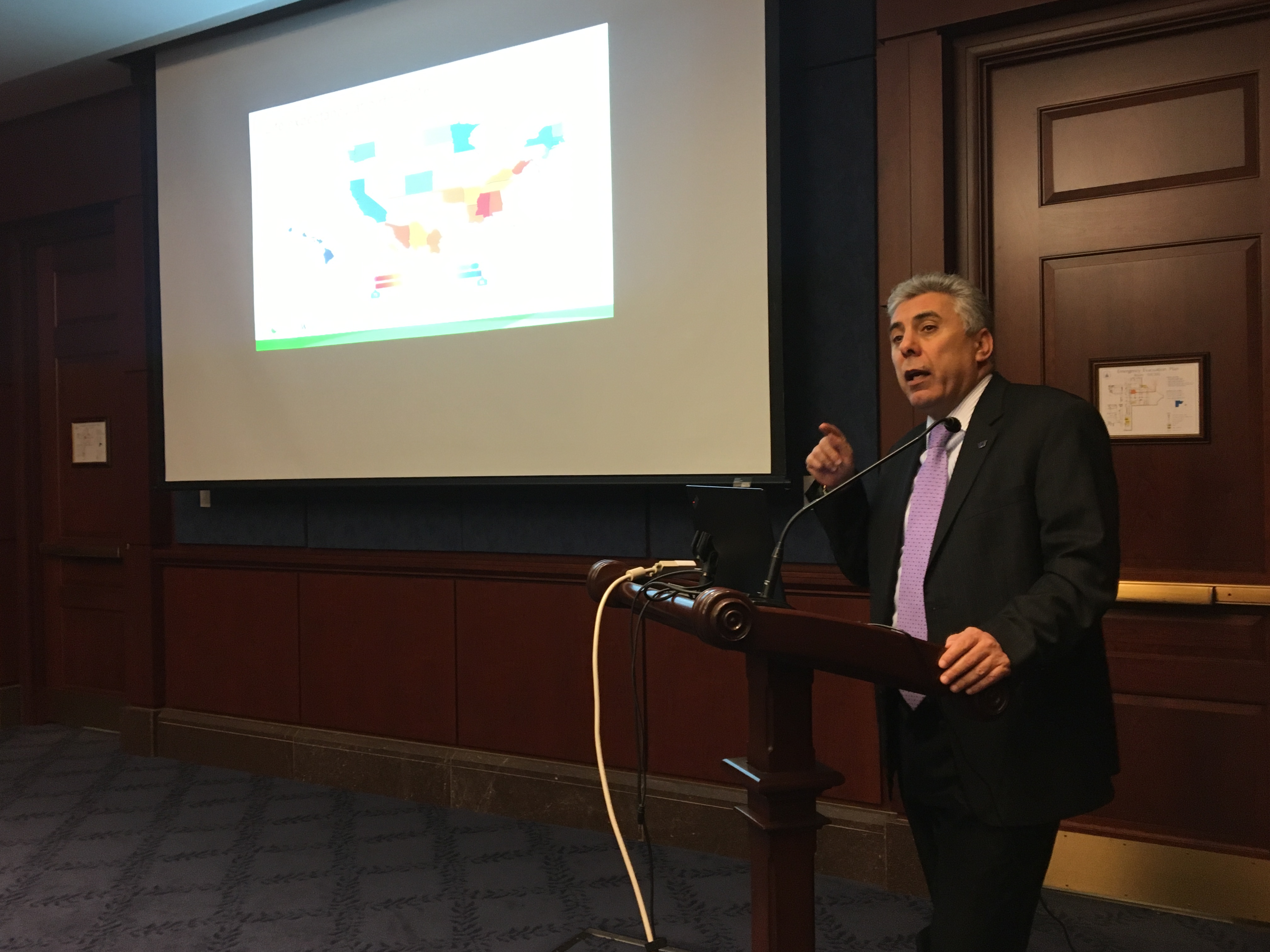 While the US spends more money on health than any other country, it ranks 40th for life expectancy worldwide. Across states, life expectancy ranges from 81.3 years in Hawaii to 74.7 in Mississippi, a difference of 6.6 years. This gap in life expectancy has grown wider over time. Risk factors such as tobacco, obesity, and alcohol use are the most impactful drivers of health disparities in the US, more so than even socioeconomic status and race/ethnicity or health care.

At the US Senate on April 17, 2018, Professor Ali Mokdad presented these and other findings about health in the US at a briefing for Senate health staff. The goal of the presentation was to raise awareness about how Global Burden of Disease (GBD) data could be a valuable resource for them, and how states can use GBD data to advocate for money to address different health problems.

Dr. Mokdad included findings from the recent GBD study “The state of US health, 1990–2016: burden of diseases, injuries, and risk factors among US states,” published in the Journal of the American Medical Association, in his presentation. He spoke about the contributions of IHME’s collaborators to this study. In the US, 613 collaborators based in 255 public and private universities and institutions around the country contribute to this work.

Through the years, GBD has influenced health policy in the United States.

When GBD was first published in the 1993 World Development report, Investing in Health, many scientists and policymakers were surprised that mental health ranked among the top causes of disease burden globally. In time, that surprise led to changes, including in the United States. In 1999, the federal government invested new attention in mental health issues. Secretary of Health and Human Services Donna Shalala wrote in Mental Health: A Report for the Surgeon General, “We are coming to realize that mental health is absolutely essential to achieving prosperity. According to the landmark ‘Global Burden of Disease’ study ... four of the 10 leading causes of disability for persons age 5 and older are mental disorders.” Later that year, the National Institute of Mental Health announced $7.3 million of new funding to study mental illness and its treatment, as well as a $61 million grant for two clinical trials to develop more effective mental health treatments.

Two other US Surgeon General reports have also drawn from GBD, one on tobacco use, entitled 50 Years of Progress, and one on addiction, called Facing Addiction in America. These reports, released in 2014 and 2016, respectively, make use of data from the GBD 2010 study to estimate the burden of smoking, drugs, and alcohol use on the health of Americans.

More recently, in December 2016, President Barack Obama signed into law the bipartisan 21st Century Cures Act, which mentions burden of disease five times. The Act mandates that the National Institutes of Health (NIH) incorporate burden of disease into criteria for awarding its Eureka Prize and into its strategic plan every six years. Using these data allows decision-makers to directly compare the impact of diseases that kill, such as cancer, and conditions that disable, such as depression. The NIH had already used GBD findings in its 2016–2020 strategic plan, incorporating burden of disease data into the factors determining how to best direct public resources and coordinate across its more than 30 centers and institutes.

The 21st Century Cures Act also stipulates that the Center for Behavioral Health Statistics and Quality in its strategic plan “shall identify strategic priorities, goals, and measurable objectives for mental and substance use disorders activities and programs operated and supported by the Administration, including priorities to prevent or eliminate the burden of mental and substance use disorders.” The Act also instructs the Centers for Disease Control to develop a report “on ways to promote innovation in the development of vaccines that minimize the burden of infectious disease.”

With the more than 400 diseases, injuries, and risk factors that it covers, the GBD study is not only useful for government. Advocacy groups, researchers, and nonprofit organizations can use it to make the case for funding.

GBD collaborators and IHME will continue to work diligently to provide annual updates of GBD data. Each year, the study will become even more useful as its scope expands to cover more diseases, injuries, and risk factors, and as new scientific discoveries and data are incorporated.